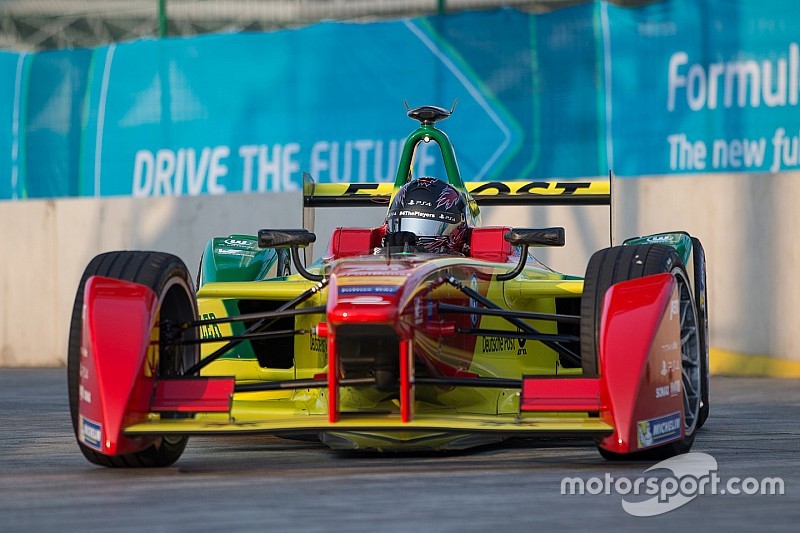 The Brazilian from Team ABT Schaeffler Audi Sport won convincingly the chaotic race for the electric powered cars in Putrajaya (Malaysia) thanks to perfect teamwork. Daniel Abt completed the good result with seventh place, which means the German squad now leads the team classification.

After the checkered flag fell, drivers, fans and media were unanimous: the Formula E race in Putrajaya will go down in the electric racings series young history as one of the most chaotic. Positions changed hands frequently, favorites were involved in minor dramas, and different strategies took center stage. Lucas di Grassi, Daniel Abt and their Team ABT Schaeffler Audi Sport kept the coolest heads in the brutal temperature of around 35 degrees Celsius.

What's important for our team today is the drivetrain that our partner Schaeffler developed together with our team is not only fast, but also extremely reliable.

After a faux pas in qualifying, which included swiping the wall heftily, di Grassi started from only sixth on the grid. Thanks to several bold overtaking maneuvers, a perfect pit stop and precise guidance from the pit perch, the South American finally celebrated his second victory in Formula E. "I'm overjoyed. Today's race was the best example that Formula E is not just about pure speed, but also about perfect teamwork and the ideal strategy as far as energy and temperature are concerned," says Lucas di Grassi. "We did everything right which merits a proper party. Nevertheless, we won't rest on our laurels: we are heading in the right direction, but we want to be even better so we can keep fighting at the front."

For a while, it looked as if both team mates in the only German team would even celebrate on the podium: Daniel Abt moved up through the field from tenth on the grid, before a technical problem while swapping cars dropped him down the running order. "What a crazy day. The race started really well for me. I was just a few car lengths behind Lucas and had some could battles and overtakes afterwards. The pits stop started perfectly, but just as I wanted to start the second car there was suddenly no energy," explained Abt. "I lost at least 20 seconds " if you subtract these at the end, I could have been spraying champagne as well. When all is said and done, the points are some consolation. It could have been worse, but could have been so much better."

Team Boss Hans-Jürgen Abt left the champagne party on the podium to his Sporting Director Thomas Biermaier, and instead celebrated below with his engineers and mechanics. "This victory today belongs to the team. They kept their cool in the heat of Malaysia, and fought to the last minute to repair Lucas" car after the crash in qualifying. He went on to repay their heroic efforts in a special way with a great race," says Hans-Jürgen Abt. "Of course it's a shame for Daniel, but it's only a question of time before he comes on strong. What's important for our team today is the drivetrain that our partner Schaeffler developed together with our team is not only fast, but also extremely reliable. These are good signs for the next races of the season."

After two of eleven races, Lucas di Grassi leads the drivers' standings with 39 points ahead of Sébastien Buemi (Renault) and Sam Bird (DS Virgin). In the team classification, ABT Schaeffler Audi Sport holds first place ahead of the Renault factory team. Unfortunate that there is quite a long break before the next race: Formula E stars in Punta del Este (Uruguay) on December 19, one day before the fourth Advent.

Di Grassi keeps his cool to win in Putrajaya

Nelson Piquet Jr. win the FanBoost vote and finish in eight at Putrajaya