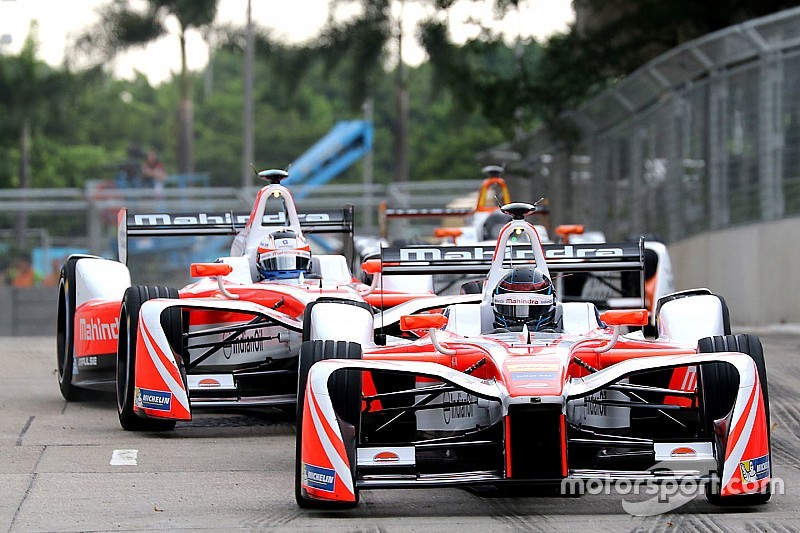 Mahindra Racing's chief engineer Vinit Patel looks back at the team's performances in the opening two rounds of Formula E season and believes that there's more to come from the Indian squad as the fight in manufacturers' standings heats up.

The team notched up podium finishes in Hong Kong and Marrakesh to sit tied in points with second placed ABT Schaeffler Audi Sport, in what is its best start to a season for Mahindra in Formula E.

Both Nick Heidfeld and rookie Felix Rosenqvist have taken a podium each along with pole position for the Swede, showcasing the competitive M3Electro powertain in its fight with Renault, Audi and DS.

In a post-event debrief, Patel talks about the pecking order after the two rounds, the team's partnership with Italian giants Magneti Marelli and a look on the upcoming races.

Q) Two podiums and a pole position, would you term it as a dream start or you think this was expected?

"Yeah, it’s been an excellent start to the season for Mahindra, it reflects on the hard work put in the off-season or rather at the end of last year before the design and testing on-track.

We had a good idea that we were aiming to challenge strongly for podium finishes and maybe even race wins this season and we are very glad to see that our engineering assessments have been proven quite well so far."

Q) How would you asses the two races so far then?

"I think it went quite well, in Hong Kong, obviously Felix made a rookie error which meant he crashed and had to make an early stop. Had that not happened, we would have had a very strong double points finish.

Obviously, Nick made it to the podium, we adapted to the strategy quite well, he did a very good job to make it happen, but Felix was right on his tail up until the incident, so I confidently think that we could have had third and fourth there.

In Marrakesh, Felix was a little bit ahead of the game compared to Nick in getting to grips with the circuit. The track proved to be a bit harder from a drivers perspective than people initially thought of it, but Felix showed his experience in adapting in between lots of different cars, tracks and championships that he had to do all this year.

I think he has done a great job with phenomenal amount of racing and testing this year with DTM, GT and Formula E. He has still got a lot more to come once he can polish some of his inexperience by getting more information and time in simulator.

He’s still getting used to racing with the energy side of things and there’s still lot of refinement to do. Still I think it’s the best driver performance for a rookie if we don’t consider the first season in the championship.

I think with Felix, once we make some progress on driving techniques and get him up to speed with energy saving and other things, I think he will be right up there with the best at the moment. We also have more to come from the powertrain, once we get a bit of confidence looking up more data and fine tune it further."

"Its been very fruitful, we wouldn’t be in this position had it not been for the partnership we began for M3Electro. I think them without any prior experience in Formula E to go up against the strong competition, they have had a tremendous debut.

We have been reasonably conservative up till now but expect us to make some gains as and when we get some confidence on them. Once we have the results from the Italy testing, the current non-race period is a good gap for the gains to make.

[Hopefully] with the improvement, we can see ourselves deploying them in the next few races, although it will be very tough to move forward tremendously with all the other competition making similar gains but we are confident."

Q) How do you see the improvement from last season?

"Last year's car had a powertrain from season one, but for this season, we completely re-invented the rear design for M3Electro, so in all areas that is weight, powertrain efficiency, its general suspension has been formed more around performance requirements and need.

Everything has been revised, nothing went untouched, so it is a package which has new bits everywhere rather than a single component, where my colleagues have worked really hard to put together from concept to drawing board to production to testing and to the race track.

Everyone involved in Mahindra are very proud that their hardwork has been rewarded so far with the results. We will continue to try and stay in the lead in future races and maintain it until the end to finish on the top step rather than third."

Q) Which race you think you can win?

"Marrakesh was the race where it was fully possible, we are investigating if we made the right strategy call, where the advantages were for with [Sebastien] Buemi and [Sam] Bird.

But there’s no doubt in my mind that we will be able to challenge again to be in the lead and try and take the chequered flag on top in Buenos Aires or rather as immediately as possible."

Q) What is the pecking order you think after two races?

"The Renault package in the hands of Buemi, he has been really leading the way in overall performance, it does seem that Nico Prost is still racing with the pack.

In terms of where we are, I would say in the race for the second place behind Buemi if you call it that way, we have Bird in the DS Virgin, Jean-Eric Vergne in the Techeetah and the Audi Abt cars, we are all in the playing field now I think.

Even though the perceived advantage of the Renault is there with Buemi, all other powertrains maybe with the exception of the few are in the chase for the second position.

I think in the coming races we will see a very tight qualifying behind potentially the P1 but even then we were able to beat them in Marrakesh, it’s still quite close, I think in Buenos Aires, we will see the group getting smaller."

Q) But is Mahindra ahead of the likes of Andretti, NEXTEV?

"So far yes, we have been able to produce or exploit the strategies and efficiency presented to us in the races. Many other teams have been in the conservative stage, NEXTEV were amazing in qualifying in Hong Kong.

But in the race they seemed they weren’t good in terms of efficiency against the rest of us, so I think we do have a slight advantage on those teams but we have to see their progress through the season because it can change with all the powertrain being good.

"I think we can get on the podium but the main objective should be a solid double points finish, that for me it means both cars in the top five.

It's very [much] achievable in Buenos Aires compared to the form we have shown so far, the fact that the circuit is where the teams have the most data on is kind off neutralised because most of the teams know the circuit. Advantage or disadvantage, I think we are confident of a good result."

Explained: Why Mercedes is interested in entering Formula E