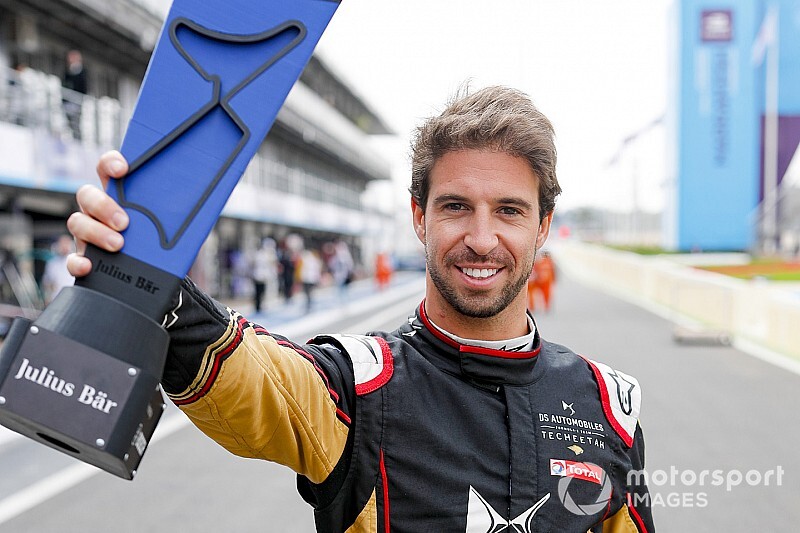 Da Costa was the sole driver to make superpole from the opening qualifying group, and went well clear as the third runner on the road in the pole shootout with a 1m17.158s.

His benchmark was under serious threat from BMW's Maximilian Gunther and Porsche's Andre Lotterer, both lapping within a tenth of da Costa but ultimately coming up short as the Portuguese driver's pole was confirmed.

Gunther had been quickest of all in the initial qualifying attempts, and looked on course to take pole as he headed da Costa by a tenth and a half after the first two sectors of his superpole lap.

But he was seemingly left to rue a lock-up at the Turn 11 left-hander and came across the line 0.069s off the pace, with Lotterer another 0.026s down – having progressed from group two alongside Gunther.

He was 0.432s off the pace in superpole, but still a comfortable fourth, ahead of Venturi's Edoardo Mortara and Nissan e.dams driver Sebastian Buemi.

Buemi had secured his fourth consecutive superpole appearance by narrowly sneaking into the top six as he went quickest in group three.

Reigning champion Jean-Eric Vergne, who had sat out Friday's track action due to illness, was slowest of the group two runners, albeit just 0.336s down on Gunther, and will start the race in 11th.

None of the runners from group four progressed into superpole, with only Brendon Hartley managing to slot in in the first half of the starting order in 12th.

The Envision Virgin team, which had looked to revive its title aspirations in Morocco after a painful pair of non-scores in Mexico, will face an uphill battle in the race, with Robin Frijns only 14th after slapping the wall on his flying lap and Sam Bird managing no better than 15th from the opening group.

Mercedes man Stoffel Vandoorne was slowest of the group-one championship frontrunners and will start 18th, but has still enjoyed a better outing than Jaguar's championship leader Mitch Evans.

The pace-setter in practice, Evans had harboured high hopes for qualifying, as he and two other drivers had made the pole shootout from group one at the venue last year.

Yet as he forewent a preparation flying lap and sought to leave his push lap as late as possible to get optimal track conditions, Evans instead took the chequered flag on his out-lap, and was consigned to starting from the back of the grid.

Unaware his qualifying had concluded, he went on to reportedly lap the circuit in 1m17.4s, which would've been good enough for first place in the initial combined qualifying order.

Instead, it means Evans is under investigation for taking the chequered flag twice, while the stewards are also looking at 21th-placed Neel Jani's Porsche regarding a potential technical infraction.

Evans "furious" after Jaguar error leaves him last on grid