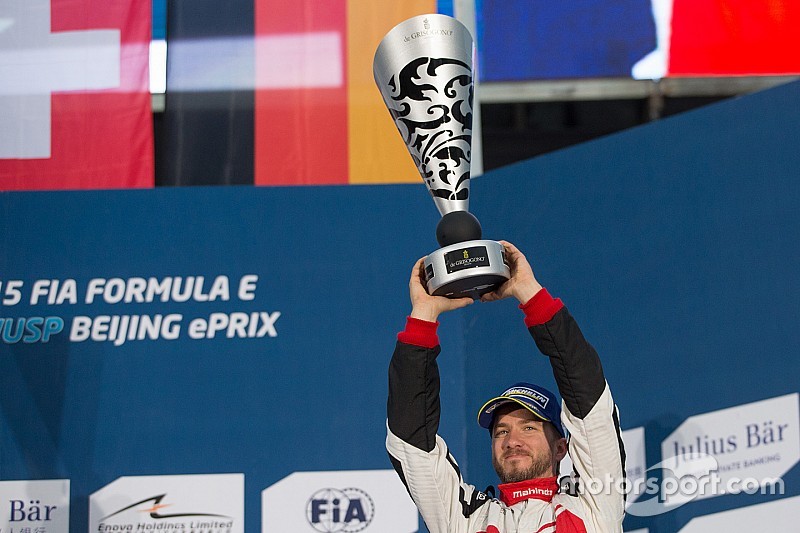 Nick Heidfeld believes that delivering Mahindra's first ever podium finish in Formula E will trigger further developments to build upon the Indian team’s successful start to its season two campaign.

The German claimed third place in the Beijing ePrix, but could have finished one place higher up the order if it were not for a sluggish pit stop during the mandatory car swap.

“I think if you would have said to me before the weekend if we came away with P3 we would have been happy,” Heidfeld told Motorsport.com.

“But there is a bit of disappointment because we had a problem with the pit stop which cost us two positions at the time, and I think if that had not happened di Grassi would have struggled to get past me on the circuit.

“But overall the position is fantastic for the team and for me at the first race together,” continued the former F1 driver.

“We all worked hard over the summer, but I still expected to have some more cars ahead of me, so yes it was a very good start and we are pleased.

“The Dragon guys [Loic Duval and Jerome d’Ambrosio] did one lap more in the first stint and we already saw last season they were very good on their consumption.

"So, they had to coast less and as a consequence they were quicker at the end."

Heidfeld feels that focusing on key vehicle dynamic areas such the now-free damper choice could bring solid gains for the Mahindra M2ELECTRO challenger.

“I think we can progress some areas in the car, particularly the damping because that is free now and there could be some better solutions and we are investigating that at the moment," he added.

"There are also things we can do on the preparation, organisation and also the software side of things to improve, so there is more to come."