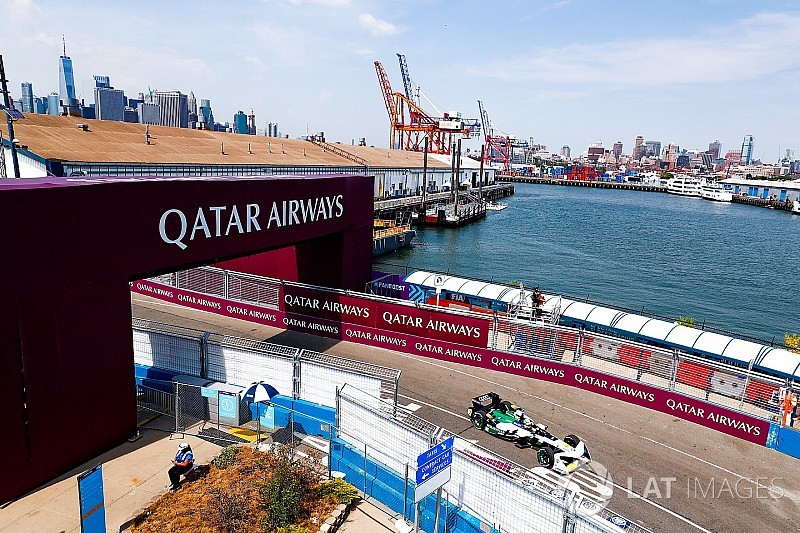 The track was very dusty at the start of the 45-minute session, illustrated as Felix Rosenqvist suffered a huge slide and just kept his Mahindra out of the barrier.

With barely 10 minutes on the clock, his teammate Nick Heidfeld crashed at Turn 12, with Daniel Abt in close proximity, as Andre Lotterer, Alex Lynn and Sam Bird quickly screeched to halt behind.

That caused a red flag as the entire field eventually became stacked-up behind the stationary German.

A second red flag was soon required as Jose Maria Lopez broke his Dragon’s right-rear suspension on the kerb at Turn 12, and he got stuck in the pit lane entry.

“It looks like the kerbing sheared off the rear suspension,” said team chief Jay Penske.

After a lengthy recovery process, there were only nine minutes remaining – before another 10 minutes were added to the session to make up for the delays.

NIO’s Oliver Turvey had set the early pace with a lap of 1m15.417s, before Sebastien Buemi and title-contender Bird swapped the top spot between them.

Di Grassi hit the top with a lap of 1m14.236s, just before Nelson Piquet’s Jaguar stopped on Pioneer Street on the exit of Turn 12. He was able to restart the car and drive back to the pits.

Di Grassi improved to 1m14.017s, before Buemi broke the 1m14s barrier with 1m13.916s. Di Grassi wouldn’t be denied, however, setting a 1m13.566s despite encountering traffic in the middle sector.

Buemi was 0.350s slower in second, ahead of Jaguar’s Mitch Evans.

Of the title contenders, Vergne was fourth, 0.722s off the pace, and Bird sixth, just 0.03s slower than Vergne. Abt was between them in fifth.

Venturi’s Maro Engel was a late crasher, but escaped with only minor damage.

Andretti boss to step down as FETA chairman