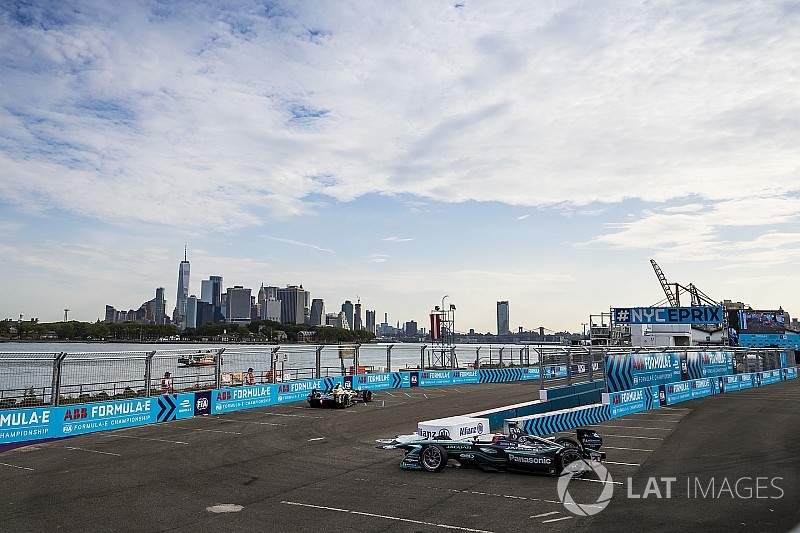 "I had a good feeling that the car would be working well around here," said Evans. "It was nice to put a good one in at the end, ahead of qualifying to know where the balance is at."

Title contender Sam Bird was third fastest for Virgin, 0.420s off the pace, with rival Jean-Eric Vergne down in 14th, almost a second off his pace. Bird suffered a spin in the closing moments of the session.

In hot and sunny conditions at the Brooklyn Circuit situated in New York’s Red Hook port neighbourhood, the majority of the field set their best practice times in FP2.

Notable exceptions were Lucas di Grassi, who clipped the right rear of one of his cars against the 90-degree right-hander of Turn 2 and had to return to the pits, and Vergne.

The latter lost a significant amount of time on his late 200kW run in the second session as he went off at the final left-hander, just about managing to stay out of the barriers.

Jose Maria Lopez was fourth in FP2, ahead of Renault e.dams driver Sebastian Buemi, who trailed di Grassi in FP1.

Nico Prost set the sixth-quickest time ahead of Antonio Felix da Costa and Oliver Turvey, who looked set to leap up the order late in FP2.

But the NIO driver lost the rear of his car at the final corner and unlike Vergne he slapped his right-hand side against the barrier before crossing the line.

Other drivers to have moments included Andre Lotterer, 11th, and Nelson Piquet Jr (Jaguar), who ended up 13th.

Daniel Abt took ninth, a place ahead of Audi teammate di Grassi. The latter had a battery changed between the practice sessions, but was able to get going again in FP2 after a lengthy delay.

New York ePrix: Buemi on pole, Vergne slung to back of grid