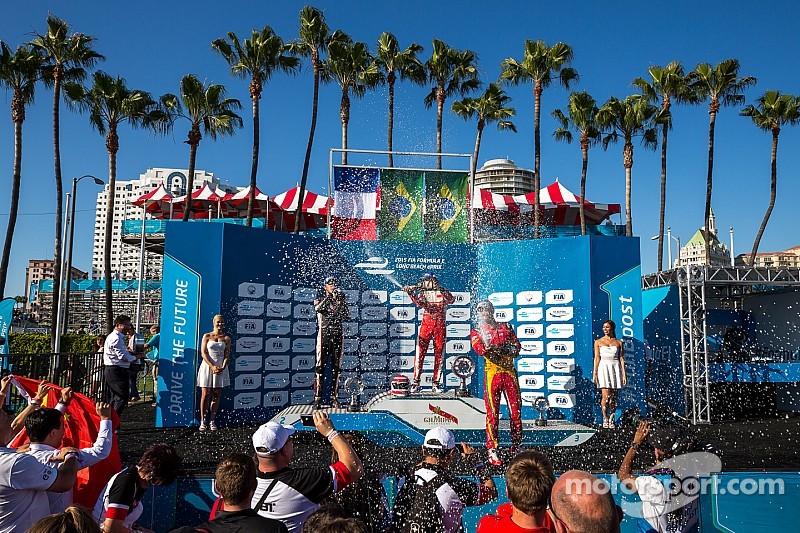 Formula E once again put on a spectacular show.

Long Beach, USA – Thirty five years on, the Brazilian national anthem was played again at Long Beach to celebrate a Piquet victory. This afternoon, Nelson Jr. took his first Formula E win in the same spot where his father scored his maiden Formula 1 victory. Also confirming that sometimes history likes repeating itself, another fellow countryman found his way to the podium: back in the day it was Emerson Fittipaldi, while today Lucas Di Grassi took third. Only the nationality of the second-placed driver was different to that of the 30th March 35 years ago, with France’s Jean-Eric Vergne in the second place that had gone to Italy’s Riccardo Patrese.

Just a short distance from Hollywood, Formula E once again put on a spectacular show, watched by over 20,000 spectators who packed the Long Beach grandstands and paddock. Among them were film stars Leonardo DiCaprio and Adrien Brody and from the world of fashion, Irina Shayk, to add some sparkle to the Long Beach stage. For the sixth time in as many races, there was a different winner: Piquet’s name can thus be added to those of Di Grassi (Beijing,) Bird (Putrajaya,) Buemi (Punta del Este,) Da Costa (Buenos Aires) and Prost (Miami,) which confirms how closely matched is the first ever electric championship.

The Brazilian took a richly deserved win, leading practically from start to finish. Having started from second, alongside Daniel Abt, Nelson got past the German under braking for the first corner and, from then on, kept the lead throughout, carving out a small but constant gap to his closest rivals. In the first stint, which saw the race neutralised twice in the early stages, firstly when Speed went off into the barriers at turn 2 and the second when Pic and Trulli collided, the former penalised, the latter forced to retire, Abt was able to keep in Piquet’s slipstream, while Vergne made the most of the first restart to pass Buemi and move into third place.

In the run of pit stops, which came later than usual, because of those neutralised periods, Andretti Autosport’s French driver managed to gain another place and sit behind Piquet Jr. but he never looked likely to pass the Brazilian. Abt kept third spot up until lap 32, when he had to pit to take a penalty for excessive energy useage. Thus team-mate Di Grassi moved up into a podium position which he had to defend to the bitter end, from Buemi who was keen to make up for the disappointment of losing pole: the Swiss driver had actually been fastest in qualifying, but his best time was later cancelled for going over the permitted limit of energy consumption.

It was only at the chequered flag that the gap from Piquet to Vergne dropped below the two seconds mark, while Di Grassi led home Buemi by a few tenths. Completing a great day for Brazil, there was a fifth place finish for Bruno Senna, while the rest of the points went to Jerome D’Ambrosio, Antonio Felix Da Costa, Jaime Alguersuari, Loic Duval and Stephane Sarrazin. The only American in the race did not have much luck, as Scott Speed was knocked out at the start through a mistake, while Sam Bird was the victim of a collision in the hectic moments going through the first chicane after the start.

Today’s win is also the first in Formula E for the China Racing team, while thanks to the 25 points he picked up, Piquet Jr. moves up to second in the Drivers’ Championship, on 74 points, just one behind fellow countryman Di Grassi, back in the lead on 75. Nicolas Prost, who led the championship coming into this round, brought home a mere two points that come with the fastest race lap, after he dropped out of the points, following a penalty for causing a collision with D’Ambrosio. In the teams classification, it is still e.dams in the lead on 124 points, while Audi Sport Abt are second on 97 and Virgin Racing third with 82.

The next round of the Formula E series also takes place in a famous motor sport location: in fact, the 9th May sees the Monaco ePrix run on a track featuring sections of the one used for the Formula 1 Grand Prix.