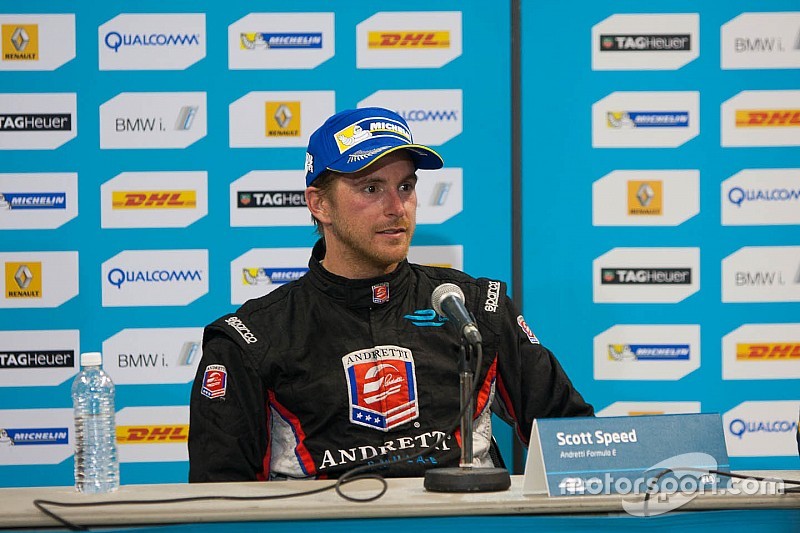 Scott Speed has been denied a surprise Formula E return in New York as a replacement for Sebastien Buemi, according to Renault e.dams chief Jean-Paul Driot.

Speed races an Andretti Autosport-run Volkswagen Beetle in the Global Rallycross Championship, which does not clash with the July 15-16 New York double-header Buemi is set to miss to contest the FIA World Endurance Championship’s Nurburgring round for Toyota.

Driot revealed Renault e.dams approached Andretti, with whom Speed made four Formula E starts in the inaugural 2014/15 season, about the 34-year-old’s availability.

“We were talking to Scott Speed but Andretti refused to release him,” Driot told Motorsport.com. “We have asked the question and we were given a no.

“It would have been a really good solution as he has done almost one season and he is American but it couldn’t happen.”

Speed finished second on his Formula E debut in Miami, then stayed with Andretti for the races in Long Beach, Monaco and Berlin – but failed to score a point again.

Driot said he has now identified Buemi’s replacement, but still retains hope there could be a last-minute reprieve and will discuss the matter with Toyota after this weekend’s Le Mans 24 Hours.

“We will not decide anything until after Le Mans and we will then make it public,” he added. “I know who we will put in the car if we have to make a change.

“There is no one around who has good experience in Formula E for us, so the driver we have will not have race experience.

“The Le Mans result for Toyota will be critical for the decision. If they win they will be happy because this is the most important race for them.”

Driot said there needed to be an understanding of the Renault team’s situation, with Buemi holding a 32-point lead in the Formula E points but 58 points being up for grabs over the two New York races.

He also pointed out that for Toyota, which leads the WEC with Buemi, Kazuki Nakajima and Anthony Davidson, “a six-hour race can be done with two drivers and not three drivers”.

Rosenqvist "confused" by penalty that cost him Berlin win