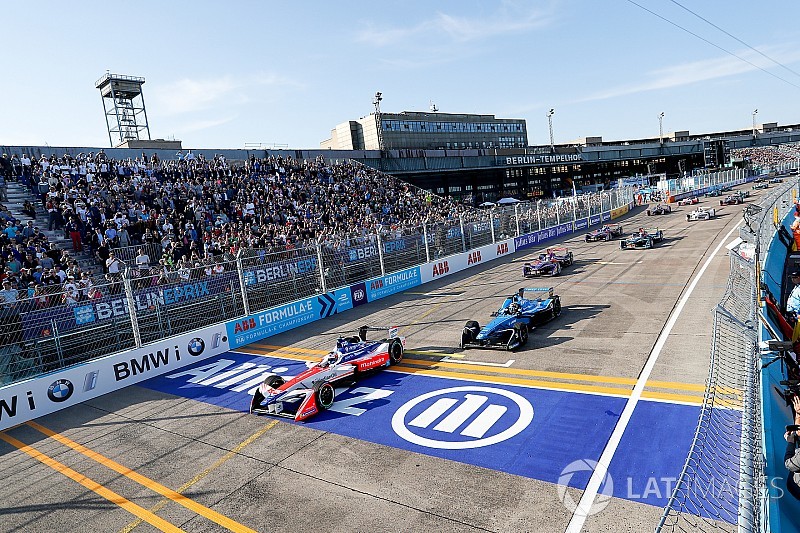 Felix Rosenqvist believed he had to try his risky move that backfired at the start of the Berlin Formula E race to regain ground in the title fight.

Rosenqvist, who was 61 points behind standings leader Jean-Eric Vergne heading to last weekend’s event in Berlin, made a bold move to the wide of the pack at the start of the race after launching from sixth on the grid.

But he slid wide on tyre marbles and narrowly avoided spinning out of the race as he fell to 15th, eventually finishing 11th.

“I tried a gamble on the outside as I saw everyone stacking up on the inside and I thought ‘this is my moment to try to get a good result, I need a good result today’,” Rosenqvist told Motorsport.com.

“[But] it didn’t work out. I braked a bit too late and just made a mistake. It’s a very thin line if you [don’t] make it, you go in the marbles, lose the grip completely.”

“Today I needed to do something. If I just sat around in P6 it would have been the same as it is now anyway.

“So I just thought today I needed to risk it and try to catch up something [in the championship].”

Rosenqvist added that from Turn 1 his race was “surprisingly bad.”

“I sort of expected to maybe finish P8 or P7 after that if I had good pace,” he continued, “but my pace was just really rubbish the whole race.

“I was sort of in free air all the time and I was expecting to gain energy as the guys in front were always fighting, but I never came close – not even in the last bit of the stints.

“We have to look at what happened because it felt like I was using a lot energy as well.”

When asked if he would be attempting to make similarly ambitious moves in the remaining three races of the season now he is 76 points behind Vergne, Rosenqvist explain that this was unlikely given he is only one point ahead of Berlin winner Daniel Abt in the standings.

“From now on I will just do the best possible to get a good result in every race, but probably not risking as much because now I have to look back as well to defend my third position,” he said.

“Miracles do happen but it’s almost mathematically impossible [to win the title] now.”

Mahindra no longer strong in Berlin

Rosenqvist won two races on the road in Berlin last season – losing the second thanks to a time penalty for an unsafe pitstop release – and felt the handling of his 2018 car was behind his different form in the German capital.

“The car hasn’t been as balanced,” he said.

“I don’t think it’s a powertrain matter, it’s more [that] I don’t feel the car underneath me and I think that’s costing a lot of energy and a lot of laptime, every corner.

“It’s just been a different car compared to last year.”