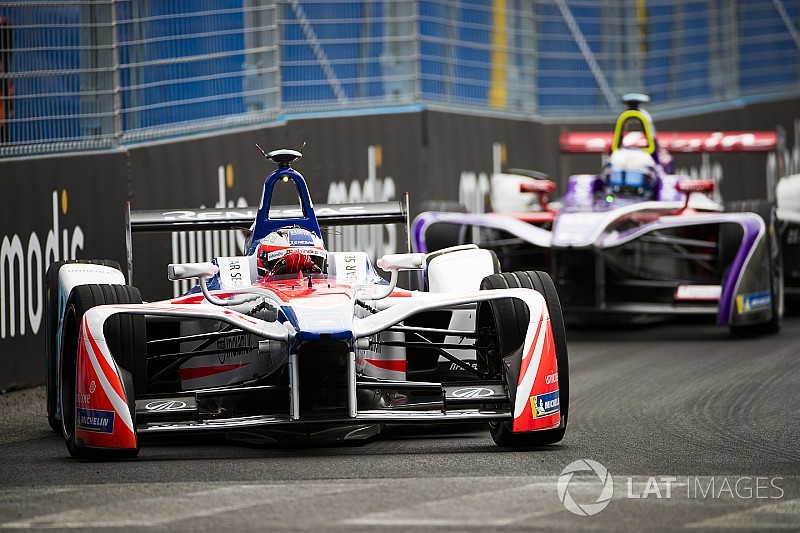 Felix Rosenqvist says it is “hard” for Mahindra to lose victory in the inaugural Rome Formula E race due to a suspension breakage after a “perfect day” until that point.

Rosenqvist had set the fastest time across the two practice sessions at the Circuito Cittadino Dell’EUR and then comfortably claimed pole position.

The Swedish driver led two thirds of the race ahead of Virgin Racing’s Sam Bird before clipping a kerb at the Turn 18 penultimate chicane and sustaining suspension damage.

“It was perfect day in every sense,” Rosenqvist told Motorsport.com. “Free practice, quali, pitstop – everyone in the team did a spot on job today, and being a very busy weekend for us here with a lot of sponsor activities and late nights.

“We’re all quite tired and I think the guys deserved a win today – that’s going to be hard for everyone but we’re going to come back.”

Rosenqvist added that he had no explanation for the suspension issue and felt there was nothing different about his driving on the lap it broke.

“We have to find out what was wrong and if there is something wrong in the design, if we have to take less kerb or if I was driving too much over the kerb, I don’t know,” he said. “I think it [happened] in Turn 18 – exiting the chicane, [but] it’s not really the one you hit a lot.

“I would say there are other kerbs on the track that have a bigger impact, so for me it was quite strange to have [it] happen there.

“I don’t know exactly which part of the suspension [broke] – I lost drive and my driveshaft went out the gearbox and I couldn’t continue. So, that’s why I had to park it immediately.

“Our plan was just to continue like we did all day – we had great pace. That’s what we did and then something broke so we can analyse how we can avoid that in the future.”

Rosenqvist’s retirement from the lead was his second in three races after a battery system error forced him out in the Mexico round last month.

The problems have cost him the chance to take two full-points hauls and the Rome retirement means he has now fallen to third place in the drivers’ standings behind points leader Jean-Eric Vergne and yesterday’s winner, Sam Bird.

“It’s one thing if you’re down in P8-P9 and you have something like this it’s not too bad,” Rosenqvist said.  “But when you’re on [for] full points and just cruising it’s like ‘what else can happen?’

“In Mexico something out of our hands happened and here [too]. It seems like only things based on pure bad luck happen. It’s quite frustrating but I guess somehow our luck will turn.”