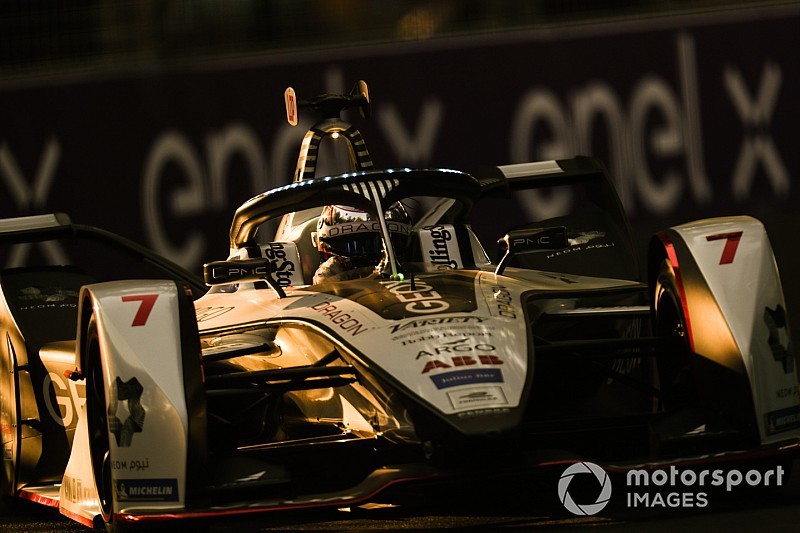 At a new 1.45-mile track set entirely within the city’s Park O’Higgins, scorching heat is set to be a key factor in the outcome of the race - as FP1 had got underway at 8am with the temperature already at 24.5 degrees.

Audi’s Lucas di Grassi topped that session - which was disrupted by a big crash for Nissan e.dams driver Sebastien Buemi - with a best time of 1m08.630s.

Virgin Racing pair Sam Bird and Robin Frijns each took a turn at the top spot during the shorter second session – which peaked at 28.4 degrees – with the latter holding the benchmark time for much of FP2.

But during a string of fastest laps set on full power late on during the 30-minute session, Lopez rose to the top of the times with a 1m08.194s.

He looked set to improve again with his final lap of FP2 with fastest sectors in the opening two thirds of the track before fading significantly during the final sector.

Frijns ended up second with his own best full-power effort – a 1m08.260s – coming during the flurry of fast times.

Di Grassi put himself third late on to split the Virgin drivers, with Bird ending up fourth as a result.

Pascal Wehrlein, who looked to be grappling with a sliding car throughout much of the early running, claimed fifth place for Mahindra Racing.

Jaguar’s Mitch Evans twice brushed the barrier at the exit of the Turn 12 left-hander, but did not cause visible damage to his machine and he ended up sixth.

Daniel Abt finished 11th ahead of DS Techeetah pair Jean-Eric Vergne, who locked up at the final hairpin mid-way through the second session, and Andre Lotterer.

Lotterer glanced the wall on the exit of the tight Turn 7 right-hander, which feeds onto the long curved section of the track, at the start of the final third of FP2 but he was able to continue.

Buemi hit the track at the beginning of FP2 despite missing much of the first session following his heavy crash at Turn 7 during FP1.

The 2015/16 FE champion locked up heavily on the approach to the corner and struck the inside wall with his right-front, which sent him careering into the barriers on the outside with major damage to the right side of his car and this caused a lengthy red flag delay.

But Buemi’s machine was fixed in time for him to go out and set the 15h best time in FP2.

Venturi’s Felipe Massa was another driver struggling with the handling of his car and he had off-track moments at Turn 12 and the final corner on his way to 16th in FP2, just ahead of Nelson Piquet Jr (Jaguar) and HWA racer Stoffel Vandoorne.