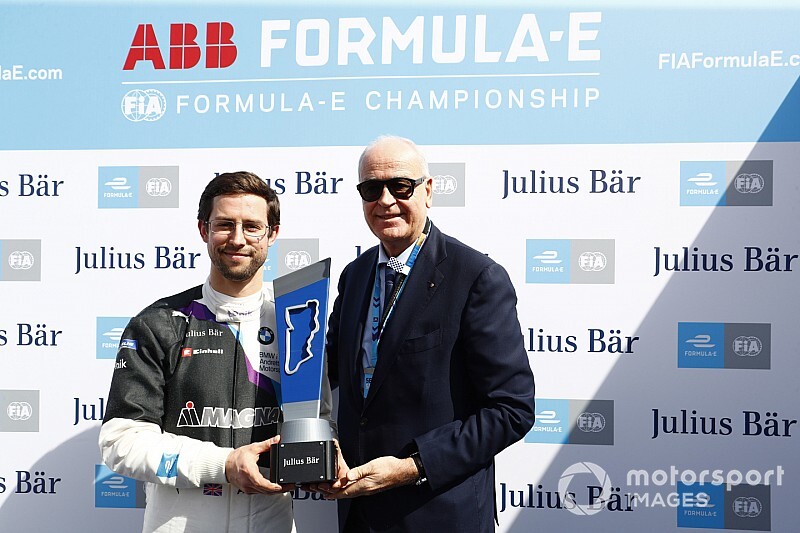 Sims made it through to the superpole session from the third qualifying group, before a rapid and planted flying lap in the final segment gave him a 1m14.563s and three points for the first pole of the season – and the second of his FE career.

Sims was investigated for a clash with Jean-Eric Vergne at the end of FP2, but the stewards took no further action as they assessed the incident as a “non-punishing race situation”, per an FIA bulletin.

De Vries had been up on Sims’s lap through the first two sectors, but a slow end to the lap cost him 0.4s and a shot at pole.

Edoardo Mortara backed-up the efforts of the works Mercedes drivers with fourth for the manufacturer’s customer squad Venturi Racing, qualifying ahead of Sam Bird, who topped the group running and picked up the first point of the season as a result.

But Bird could not follow up on that effort in superpole as he made a mistake at the long Turn 4 right-hander by getting off-line and sliding close to the wall on the extremely low-grip surface, losing 0.8s to Sims in the first sector.

He stayed on it – setting the fastest sector three of superpole – to take fifth ahead of Mahindra Racing’s Jerome d’Ambrosio.

Andre Lotterer will start seventh for his first FE race for Porsche as the top runner not to make it through to superpole, qualifying ahead of Oliver Rowland (Nissan), who survived a brush with the wall going through the rapid and undulating second sector on his group two lap.

Maximilian Guenther and Oliver Turvey – both from group three – will round out the top 10 on the grid for Friday’s race.

Reigning champion Vergne will start 11th after he topped a frantic group one ahead of Robin Frijns, who qualified 12th.

The top six drivers from last year’s championship left it very late to head out in a bid to find better track conditions on the ever-improving circuit.

Antonio Felix da Costa ended up leading the pack, but he went to the full 250kW after one out-lap from the pits and ended up well adrift of Vergne – he later reported he had a brake issue – and will start 21st in his first race for DS Techeetah.

Lucas di Grassi headed the queue of group one runners taking a second warm-lap – they all had to overtake da Costa in the first sector on their 250kW laps – and he ended up with the second-slowest time in that segment, and down in 19th overall.

Vergne and Frijns topped the group from the middle of the pack, which was running virtually nose to tail by the chequered flag, as Sebastien Buemi and Mitch Evans followed them in the group one standings.

Buemi was eventually shuffled back to 14th and Evans 16th.

Brendon Hartley will make his FE debut from P18 after struggling massively for grip all the way around his group four lap after he had missed much of practice following his crash in FP1 and braking issues in FP2.

Neel Jani will start his first FE race for Porsche from 20th after he was held up by yellow flags brought out for separate crashes for James Calado and Nico Muller at the end of group four.

Calado hit the wall going through the ever-tightening Turn 16 right-hander and then slid into the barrier at the exit of Turn 17, which follows immediately and leads on the track’s main straight.

Seconds behind Calado’s twin crashes, Muller had exactly the same sequence – losing the rear in Turn 16 and striking the wall before sliding to a halt at the Turn 17 outside barrier.

Muller will start 23rd and Calado 24th as a result of their warm-up lap times.

Muller and Calado were later disqualified from the qualifying results as Dragon and Jaguar asked to remove them from parc ferme to make repairs to their cars - but they will line-up in the same order they qualified based on their warm-up lap times in 23rd and 24th.

World of Outlaws gears up for 'Down Under' event