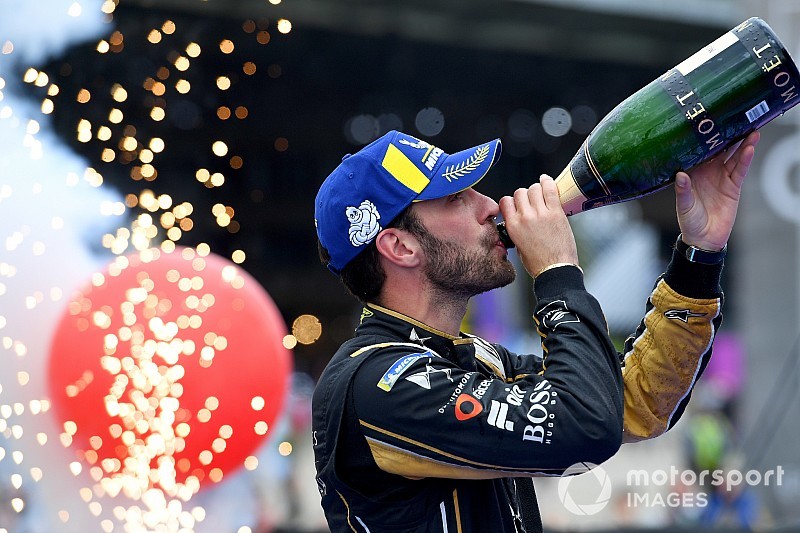 Vergne's third win of the 2018/19 ABB FIA FE season has allowed him to open up a commanding points lead of 32 points over Lucas di Grassi heading into the double-header New York finale after the Audi driver could only finish 10th.

Di Grassi was one of several drivers incensed by the red flag period caused Pascal Wehrlein ending up in the wall at the Turns 12-14 chicane - the first corners of the race - and blocking the track in from of Maximilian Gunther and Sam Bird and the pack behind.

Drivers such as di Grassi - who started 19th - were far enough down the field to be able to cut the chicane and effectively make up eight places before the red flag was shown.

After a lengthy delay, the grid was reset and returned to drivers to their original starting positions.

Vergne made a strong getaway to hold his lead at the restart, but he immediately came under pressure from fellow front-row starter Mitch Evans.

The Jaguar driver continually looked to make moves stick at the long run to Turn 3 and Vergne would react to Evans activating his first use of attack mode by activating the extra power on the following tour after resisting the New Zealander around the rest of the lap at Turns 3, the long bend of Turn 6 and the hard-braking point of Turn 7.

There would be a repeat battle at the midway point when Evans again activated attack mode and attempted to pass Vergne at Turns 3 and 6 before the Techeetah driver could respond with his own activation.

Vergne was then able to use his attack mode period to pull around a second on Evans, who looked in danger of being pulled into a battle with third-placed Sebastien Buemi.

While Evans managed to stay clear of Buemi, the late arrival of pouring rain with two laps to go allowed Evans to close back up on Vergne with Buemi and Andre Lotterer in tow. Vergne would hold on to win by just over a tenth ahead of the chasing pack.

Lotterer became a late contender after strategically using attack mode later than his rivals and climbed from eighth on the grid to fourth. The Techeetah driver picked off Gunther at Turn 7 and then attempted to get past Envision Virgin Racing's Sam Bird at the 90-degree left-hander of Turn 9 on the next lap.

While Bird rebuffed him in that instance, the Virgin driver made a mistake at Turn 7 shortly after that allowed Lotterer through for fourth. But Lotterer would be given a post-race penalty.

Bird would finish fifth ahead of Gunther, with Audi's Daniel Abt holding off a late charge from Jaguar's Alex Lynn for seventh. Di Grassi’s rise through the field was mirrored by BMW Andretti's Antonio Felix da Costa, who finished 12th behind HWA's Stoffel Vandoorne.

Da Costa is however under investigation for a full-course yellow infringement that followed Mahindra Racing's Pascal Wehrlein coming to a halt at Turn 8, the corner before the attack mode activation point.

A clash between Edoardo Mortara, Gary Paffett and Alexander Sims is also under investigation after Mortara's late move led to contact between the trio. Jerome D'Ambrosio was punished during the race after he pitched Robin Frijns into a spin that ended the Virgin driver's race moments before the eight-car pile-up.