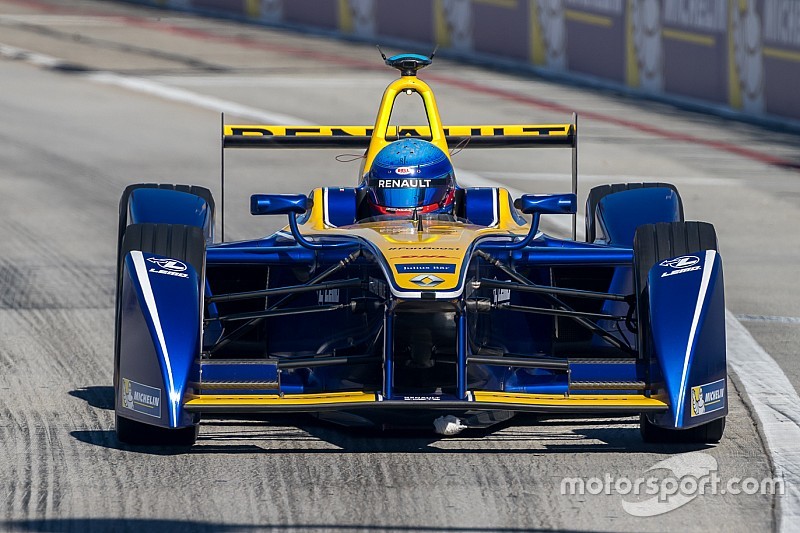 Round eight of the now ten-round series takes place in the heart of the German capital, Berlin.

Renault e.dams will be looking to consolidate its advantage in the teams’ championship and close the gap in the drivers’ race in the next round of the FIA Formula E Championship this weekend.

Round eight of the now ten-round series takes place in the heart of the German capital, Berlin. The field will race on a specially-constructed 11-turn 2.03km street track in the central Mitte district of the city. Cars will wind their way round the buzzing Alexanderplatz and the TV tower and head down the ultra-wide Karl-Marx-Allee, where the pitlane will be located. The venue replaces the Tempelhof airport track used last year, which is not available this time round.

...we still have three races to go and there are a lot of points on offer.

With three rounds to go, Berlin could be a pivotal race in the championship. Third place for Sébastien Buemi in Paris after qualifying eighth demonstrated the inherent speed of the Renault ZE15, but the Swiss lost some ground to title rival and Paris winner Lucas di Grassi. Nicolas Prost finished a close fourth to add to the team’s tally of points and take him closer to fourth position in the drivers’ championship.

Renault is the market leader in electric vehicles in Europe, as well as in Germany with a 25% market share. The 100% electric Renault ZOE is the undisputed bestseller in the German retail market: in 2015 33.6% of all private registrations in the market were ZOEs, representing an increase of 155% over the previous year. Thus every third EV car sold to a private customer electric vehicle is a Renault.

The action gets underway on Friday at 17:30 local time with a 30 minute shakedown before further practice and qualifying on Saturday. The 48 lap ePrix starts just after 16:00.

Views from the team

"We saw in Paris how tight everything is in the championship. The top three are out in front, but it’s very competitive between them and small details can make a big difference. For example in Paris; we were struggling in the cold temperatures with our tyres and started further back than we would have hoped.

We are mindful of this, but also confident. We’ve been competitive since the start of the year and in the race in Paris we were very quick again. Our objective is now to recapture the same standard between qualifying and the race. Abt and Lucas di Grassi are always there, so it is up to us to be competitive and ahead in every session."

"Last year the race in Tempelhof had a big crowd of very interested fans. I hope we will have even more people this year as the new venue is more central, very similar to Paris. The track itself looks good, but what we can’t see from the simulations is the bumps and the different surface markings. Everybody is in the same boat, so we need to react quickly to get the best performance from the car and keep ahead of the others.

We have put everything into extending the lead and getting back on top in the drivers’ championship in Berlin. We have sorted our technical problems from South America and have done a lot of work on the tyre warm up since Paris. We aim to put all this together and be on the top step of the podium again."

"I really believe we have a competitive car on all circuits, particularly in race trim. For Berlin I am confident we can reproduce the form as the track incorporates elements of other circuits we have visited and done well at. What we do need to improve, however, is our qualifying form.

In Paris we had problems heating our brakes and tyres in qualifying so we started far down, especially with Seb, who hadn’t got his usual confidence in the car. We’ve looked at this in detail now and have put in place some fixes so we are relatively confident we can fight for the podium and the win in Berlin."

"I’ve studied the track in Berlin but it is difficult to get a feel for it without having been there and walked the track. So far, it looks like a very traditional street track: long straights, tight corners and I think it will be bumpy. Last year we had lots of fans and this year we are even more central, so I hope we put on a good show with some great racing.

I’m confident in our preparation so far; the team is well structured and working hard. Each weekend we’ve been in the top five and we need to continue that until the end of the season and get the teams’ championship. I’ve had some good results so fourth place in the championship is definitely possible and why not third if there are opportunities. That would be the ultimate aim, to finish in the top three."

"The last race in Paris was reasonable. We started in eighth and finished in third so we could not have expected any more. The car was quick once we had got the tyres up to temperature and I was able to push hard. It’s a shame that Lucas finished ahead and took some more points for the championship, but we still have three races to go and there are a lot of points on offer.

In Berlin the plan has got to be to start higher and try to race out in front. We know we can do it as in Paris the car was super-quick; we just started too far behind to be able to do any better. The track looks similar to Paris, with plenty of overtaking spots, so we’ve got every reason to be confident going into the race."

Di Grassi looking to extend his lead in Germany