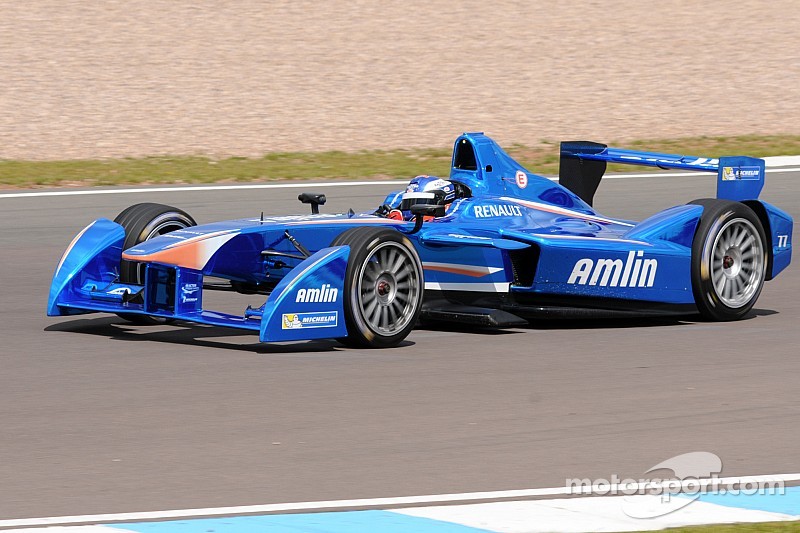 Japanese driver to line-up alongside Katherine Legge in Beijing. Fabio Leimer to act as reserve driver.

Amlin Aguri, a new racing team sponsored by London-based global insurance company Amlin, has today confirmed its driver line-up for the inaugural race of the all-electric FIA Formula E Championship. Takuma Sato will join Katherine Legge for the opening ePrix in Beijing on September 13, with Fabio Leimer acting as the team’s reserve driver. Portugal’s Antonio Felix da Costa, already confirmed for the team, is unable to compete in Beijing due to his DTM commitments.

Takuma Sato began competing in Formula 1 in 2002 driving for Jordan Grand Prix and Super Aguri F1.  In 2010, he moved to IndyCar driving for KV Racing and Rahal Letterman Lanigan Racing before joining A.J. Foyt Racing for the 2013 season where he became the first Japanese driver ever to win in IndyCar at the Long Beach Grand Prix.

Takuma Sato said: “I’m very much looking forward to making history with Amlin Aguri as we compete in the first ever Formula E race. I’m excited to join the team especially reconnecting with good old friends from Super Aguri F1 team days and going racing together again.  I’ll be pushing hard to make sure we’re doing our absolute best in Beijing. Racing electric cars is something fascinating and it will take motorsport into a new direction and I’m thrilled to be playing a part in these early stages.”

Fabio Leimer, 25, joins the team as reserve driver for the Beijing race having tested with Amlin Aguri over the summer.  He is one of motorsport’s brightest talents, being the reigning GP2 champion, and currently drives for Rebellion Racing in the FIA World Endurance Championship.

Fabio Leimer said: “I’m proud to play a role with Amlin Aguri during the first Formula E race in China. The team has been working hard to be ready for this moment and we have a great opportunity in Beijing to make a name for ourselves on the world stage.”

Aguri Suzuki, Executive Chairman of Amlin Aguri, said: “On behalf of everyone at Amlin Aguri it is my pleasure to welcome Takuma and Fabio into our Formula E team. This new electric series is showcasing the bright future of motorsport and we’re all looking forward to embarking on this journey together. Takuma is a proven driver and his presence will provide unity and experience for the team. He has great knowledge of how to race on street circuits which will also be an important attribute for us.”

Team Principal Mark Preston said: “It’s great to have Takuma and Fabio on board with Katherine at Amlin Aguri. Takuma is a street circuit specialist and his experience in IndyCar will bring a wealth of knowledge into the team. Fabio knows what it takes to succeed in a one-make championship and when he gets his opportunity we know he can perform. Everyone wants to win the first Formula E race and Amlin Aguri certainly won’t be passing up this opportunity to etch our name into the history books with a podium result on the streets of Beijing.”

Charles Phillips, CEO of Amlin, said: “This is the automotive technology of the future, ideal for the world’s largest cities, many of which suffer from very poor air quality.  The innovation from this championship has the potential to radically reduce our reliance on carbon based transport solutions.”