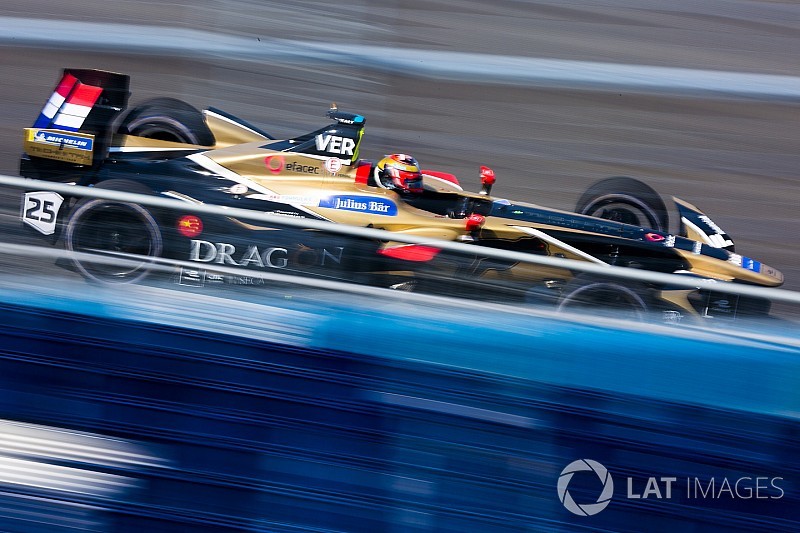 Techeetah says a software change because of reliability concerns caused Formula E points leader Jean-Eric Vergne to exceed his maximum power allowance in qualifying for race one in New York.

Vergne and his team-mate Andre Lotterer were thrown out of qualifying for the first race of this weekend’s FE season four finale at the Brooklyn Circuit in New York as they both went over the maximum power allowance of 200kW during their group qualifying runs.

When they were place under investigation, with Vergne’s car recorded as reaching 205kW and Lotterer’s 204kW, the former had been at the top of the group qualifying times.

As a result of the penalties, Vergne will start 18th and Lotterer 19th for Saturday’s race.

“We tried to come here as prepared as we could and as reliable as we could be,” Techeetah boss Mark Preston told Motorsport.com. “We did a very small update on the software for reliability [reasons] and it just caused a problem in qualifying.

“We have to go back to the old version [for the race] – simple as that. I don’t exactly know what the reliability problem was, but it was a small fix, [and] this one just caused some other errors.

“[We’ll] just go back to the old code from Zurich. It’s not simple because you have act on the cars and do all those checks, so it’s not simple but it’s doable.

“Other people have got caught out over the years for different reasons so that’s it – if you’re over, you’re over. Everybody knows how it’s measured and it went over.”

Preston added that Techeetah was able to take consolation from Vergne’s title rival Sam Bird qualifying 14th for the penultimate race of the season.

“It’s disappointing, but then Sam is not incredibly far forward on us either,” he said. “We’re focussing on him and the Audis are fifth and 11th.

“So we’re the worst off, but the guys we’re competing with are certainly not on pole and going off the front of the grid.

“As we saw in Zurich, anything can happen and the guys were fast and qualifying proved even though it was a little bit over the 200kW, not much, and therefore the guys are confident with the speed.

“JEV is in good spirits because he can see Sam is not too far ahead and he’s focussed on the drivers’ championship – he’s pretty calm and cool.

Jose Maria Lopez has been given a formal reprimand for activating his 200kW mode before the start of the last sector in qualifying, but he keeps his seventh place on the grid as “this early usage of maximum power does not lead to a performance advantage for the car on its fastest lap,” according to an FIA bulletin.

Nelson Piquet Jr has also been given reprimand for making a dangerous manoeuvre during practice start exercises at the end of FP2.

New York ePrix: Buemi on pole, Vergne slung to back of grid