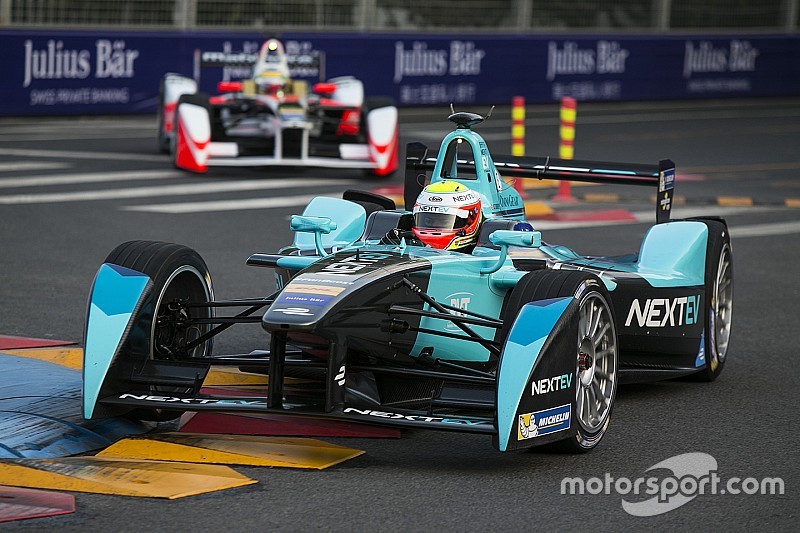 Both NEXTEV TCR drivers were in the top three of the FanBoost vote, Nelson Piquet Jr in second and Oliver Turvey in third.

The 2015-16 FIA Formula E Championship got underway this weekend in Beijing, China, with NEXTEV TCR Formula E Team drivers Oliver Turvey and Nelson Piquet Jr finishing 6th and 15th respectively. The team was delighted to score points after enduring a challenging weekend. The 26-lap Beijing ePrix took place on a custom designed 3.439km 17-turn track at the site of the 2008 Beijing Olympic Games. Both NEXTEV TCR drivers were in the top three of the FanBoost vote, Nelson in second and Oliver in third, which gave them each an extra boost of power in the second half of the race.

Friday testing showed well for Oliver, who put his NEXTEV TCR car sixth in the standings in the 30-minute session. He was able to complete 29 laps of practice in Saturday’s two sessions, finishing eighth fastest in free practice 1 and 11th in FP2. He was drawn out in the fourth group for qualifying and his fastest lap put him 15th overall in the standings, securing an eighth row start.

On lap one of the race, Oliver lost a position to Team Aguri’s Antonio Felix Da Costa. He moved back up to 15th after Simona de Silvestro’s retired. On lap 14 Jacques Villeneuve and Da Costa were involved in an incident causing Da Costa to retire and bringing out a full course yellow. Oliver was able to overtake Villeneuve and then he pitted on lap 15 for his car change and emerged in seventh. He moved up to sixth on lap 22 when Nicolas Prost retired, and scored 8 points for his result.

Oliver Turvey: “It was a great race, there was a bit of a mess at the start so I went straight into energy saving mode. We were able to catch up at the end of the first stint as the cars in front were struggling on energy levels. I managed to overtake Villeneuve which I was happy about and then the full course yellow while we were in the pits helped us jump up a few places. The second sting was fairly straightforward, we managed energy well and didn’t get pressure from behind.

To get sixth here is a great result for me personally but also as after qualifying we were a bit disappointed with the pace of the car so the result was probably the best we could have achieved today. Thanks to the team for everything, it’s great to get some points on the board.”

The 2014/15 FIA Formula E World Champion was at a disadvantage on Saturday after the team suffered with issues with his car during Friday and Saturday’s testing and practice sessions and as a result ran extremely limited laps. He was then drawn out in the first of the four qualifying groups. As lap times got quicker in the final three qualifying sessions, Nelson found himself finishing the session in 18th.

Starting from the ninth row of the grid, Nelson maintained his position in the opening stages of the race. On lap three Nelson was promoted to 17th after de Silvestro retirement. He pitted on lap 15, after Villeneuve and Da Costa’s incident and emerged when green flag racing resumed a lap later in ninth position. On lap 17 he temporarily stopped on track due to a technical issue, but was able to continue racing, albeit falling to 16th. On lap 22 he moved up to 15th on Prost’s retirement, and crossed the line in that position.

Nelson Piquet Jr: “This weekend has been difficult. Coming from winning a championship to a whole new season with a new car that we have had some problems with this weekend has of course been really frustrating. But part of being a driver is sticking together, working with the team and getting out of the hole together. It’s not just about being quick, but about building up a team and being on their side. It’s only the first race so I don’t think it will be like this all season, but we need to work hard to improve things.”

Steven Lu, Team Principal, NEXTEV TCR: “We played a risky strategy pitting late, but it worked out well as both drivers were able to come out of the pitstop in the top ten. We are delighted that Oliver was able to get in the points and disappointed that Nelson’s issue in the race stopped him from doing the same. It has been a difficult weekend for us but we will take the positives and work very hard before the next race in Malaysia on what we need to do to improve. Once again we have had a fantastic race in Beijing with the Chinese fans embracing Formula E and I am proud that NEXTEV TCR could race in the team’s home country.”