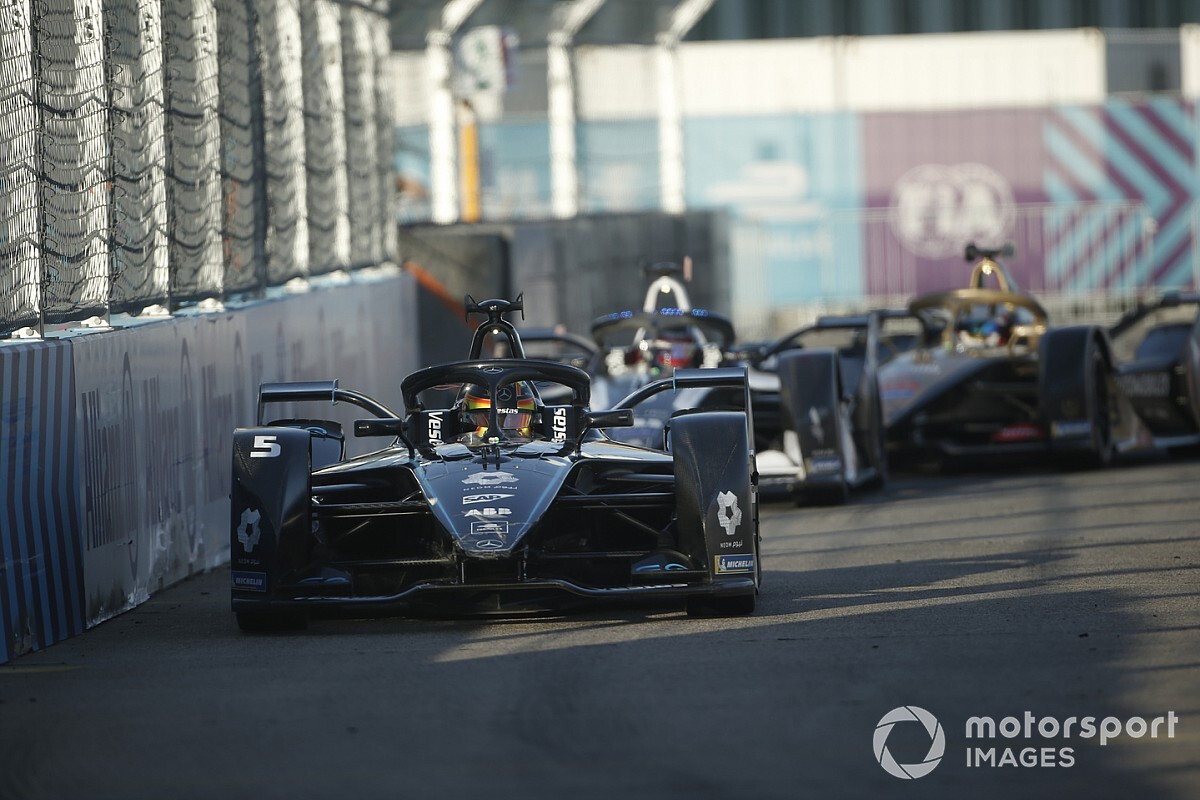 Mercedes’ ex-F1 racer Stoffel Vandoorne won the sixth Berlin E-Prix at the Tempelhof Airport, the final round of the 2019-20 FIA Formula E Championship, to take second place in points.

Vandoorne twice dropped from the lead as he moved off line to activate both of his attack mode boosts in a race he managed expertly from pole to beat his team-mate by 1.3s.

Nissan e.dams driver Sebastien Buemi had been on course for second but late-race energy conservation allowed reigning FIA Formula 2 champion Nyck de Vries to pass to ensure the Mercedes 1-2. That assured Vandoorne of second place in the standings ahead of Buemi.

Third-starting Rene Rast (Audi) made a strong launch to attempt a pass around of the outside of Buemi into Turn 1, which allowed Vandoorne to break away to an initial 1.6s advantage.

Vandoorne moved for an early use of his first 35kW attack mode boost on lap seven and did briefly re-join the racing line in second place ahead of de Vries – who passed Rast at the final corner on lap one.

But on the next tour, Vandoorne was able to close and pass Buemi into Turn 1 as the Nissan e.dams driver then opted for his power increase and fell to third. Buemi followed Vandoorne’s lead and passed de Vries into the first corner to resume second place. That paved the way for a largely processional middle stint of the race, with Vandoorne managing a 1.3s lead.

Vandoorne again fell to second behind Buemi when he moved for his final four-minute boost, which looked to be a risky strategy should a late-race safety car materialise. But despite bodywork from Oliver Rowland’s car being knocked on to the racing line, conditions remained green to the flag for Vandoorne and Mercedes to score their first FE wins.

De Vries had expertly managed his energy throughout the race, holding a 1% cushion over his team-mate and Buemi.

As Buemi moved to lift and coast in the closing moments of the race, de Vries was able to lunge up the inside into Turn 7 to secure a team 1-2 and his best result in the championship. That left Buemi to round out the podium ahead Rene Rast, who this time enjoyed a quiet close to his race for Audi.

Sam Bird, by contrast, had a meteoric rise from 14th on the grid to fifth in his last race for Envision Virgin Racing before moving to Jaguar for next season. After closing up to team-mate Frijns, the Dutch driver let Bird through to provide a buffer back to Lucas di Grassi, running on attack mode.

A late retirement for Frijns, after colliding with Maximilian Gunther, did allow di Grassi into sixth, one place ahead of Jean-Eric Vergne. The recovering DS Techeetah driver led his group one qualifying rivals who all endured a torrid session to line up at the back of the grid.

Vergne made solid work of the pack behind Gunther, but when the BMW Andretti driver was delayed in his collision with Frijns, Vergne claimed seventh.

Alex Lynn ran to yet another strong result for Mahindra Racing in eighth as newly crowned champion Antonio Felix da Costa climbed to ninth. Edoardo Mortara completed the top 10 ahead of Jaguar’s Mitch Evans, and then Gunther and his team-mate Alexander Sims.

Behind the two Porsches of Andre Lotterer and Neel Jani, 11-time grand prix winner Felipe Massa was 16th in his final race for Venturi Racing.