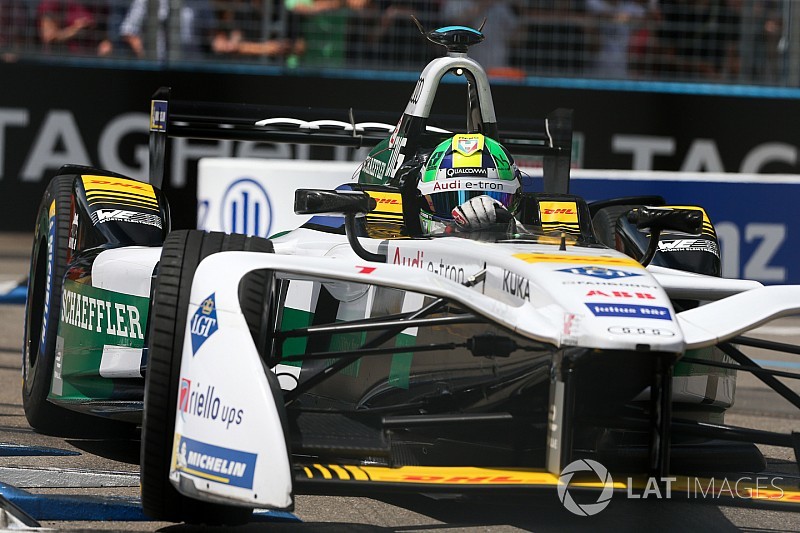 Lucas di Grassi claimed his first Formula E win of 2017/18 has he claimed victory in the Zurich E-Prix ahead of Sam Bird, who nearly halved Jean-Eric Vergne’s championship lead.

Audi’s di Grassi rose from fifth on the grid to win a race where several drivers – including polesitter Mitch Evans and Vergne – were hit with controversial penalties.

At the start of the 39-lap race, Evans defended from Andre Lotterer before scampering clear to pull an early two-second lead.

That advantage was slowly reduced over the course of the first half of the first, as Lotterer and Bird closed in behind him.

Di Grassi began to work his way up the order after a low-key start, while Vergne – who had started down in 17th after a poor qualifying showing – made rapid progress.

On lap 13, di Grassi took third place from Bird with a diving move down the inside of the Turn 10 hairpin, and the 2016/17 champion broke Lotterer’s stiff defence with a late lunge to the fast right of Turn 1 three tours later.

Di Grassi had more power than his immediate rivals and used this to claim the lead at the start of lap 18 – blasting by Evans on the run to Turn 1.

A lap before, Vergne had attacked Felix Rosenqvist for P8 at Turn 1 and their clash at the corner sent the Mahindra Racing driver into the wall and triggered a sequence of events that impacted several drivers.

Rosenqvist managed to reverse out of the barriers, but his damaged front wing fell off a few corners later – with Vergne hitting it just before he passed Jerome d’Ambrosio.

A full course yellow was called to remove the debris, with the leaders piling into the pits.

Di Grassi maintained his lead, but Vergne could not get going immediately and fell back to ninth.

Things got worse for Vergne when it was announced that he, Evans, Lotterer and Sebastien Buemi were under investigation for speeding during the FCY.

Shortly before Lotterer deprived Evans of second on the road, the group were all hit with drive0through penalties.

They served these in ones-and-twos, and the development allowed Bird, who had fallen behind Buemi in their battle for fourth just before the race was suspended, to move into second.

Lotterer fell to fourth ahead of Evans, with Buemi and Lopez down to sixth and seventh, as Vergne dropped to ninth.

Lotterer held on to fourth, as Buemi used his fanboost to pass Evans late on for fifth.

Nick Heidfeld had gained ground thanks to the penalties and he then shuffled Evans to seventh ahead of Antonio Felix da Costa and Oliver Turvey.

Vergne battled back to secure 10th, but could not find a way past Turvey and his standings lead is down from 40 points to 23.

Lopez finished 12th after nosing into the barriers at Turn 1 late on, with Berlin winner Daniel Abt 13th after losing his rear wing in a clash with Nelson Piquet, who did not finish, on lap one.

Mahindra "bittersweet" after sixth in Zurich