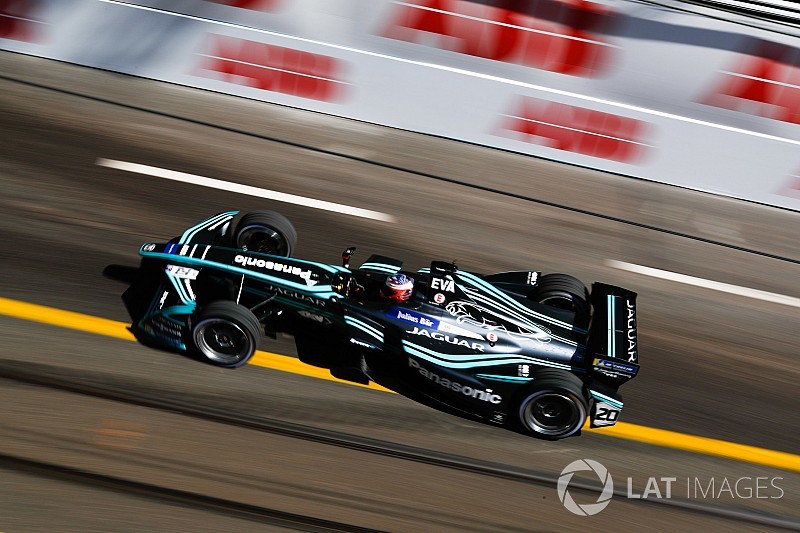 Mitch Evans and Jaguar claimed a maiden Formula E pole position as the New Zealander topped qualifying for the Zurich E-Prix ahead of Techeetah's Andre Lotterer.

Evans - second in both of Sunday's practice sessions and third overall – topped the group phase of qualifying.

Running last in superpole, he attacked the 2.465kms Zurich Street Circuit – taking a wider line than his rivals heading over the bumps approaching the fast right of Turn 1.

Evans was behind Bird and Lotterer through sector one, but a fastest split in the second segment gave him enough of an advantage to pip Lotterer to pole by 0.137s.

Lotterer had already helped his Techeetah teammate Vergne by denying Bird the top spot after their laps in superpole, which meant the Virgin Racing driver could not take three points for pole.

Bird was the fastest driver in sector one during the superpole running, but he could not keep up his momentum around the rest of the lap – slightly clouting the wall with his left-front wheel at the exit of the Turn 9 chicane – and ending up 0.211s behind Evans.

Dragon duo Jerome D'Ambrosio and Jose Maria Lopez made it through to superpole with two rapid laps at the end of the fourth and final group qualifying segment.

In superpole, D'Ambrosio matched Lotterer and Bird before fading to fourth in the final sector.

Lopez, who will drop three places on the grid for failing to slow for a yellow flag in FP1, held a dramatic sideways drift at Turn 1 to keep his car out of the barriers, but it cost him nearly a second in sector one and he ended up fifth.

Practice pacesetter Lucas di Grassi missed the cut for superpole due to D'Ambrosio and Lopez improving with their late laps, as did Sebastien Buemi, who will start seventh.

Nico Prost was just 0.023s behind his Renault e.dams teammate in eighth, as Berlin winner Daniel Abt took ninth in the second Audi.

Felix Rosenqvist rounded out the top 10 for Mahindra Racing.

Nelson Piquet qualified 11th, just ahead of Alex Lynn, who was investigated for breaching Article 23.12 of FE's sporting regulations - entering the fast lane before the pit exit was opened for group three.

Lynn was hit with a three-place grid penalty and will start this afternoon’s race from P15 as a result.

Motorsport.com understands a miscommunication from his Virgin team meant he set off early.

Like Buemi, Abt and Rosenqvist, Vergne failed to progress from the first group to take to the track.

Vergne was eventually shuffled down to 17th and faced a stewards investigation for breaching Article 33.3 - activating the 200kW mode before the final sector ahead of his qualifying flying lap.

Abt faced a similar investigation ahead of the Berlin but was allowed to keep his pole and just received a reprimand, which Vergne also received.

His car was intermittently at 200 kW for around 100m before the beginning of sector three "the Stewards heard from the driver and team manager who explained that this happened by misleading the sector two end line," according to an FIA bulletin.

"This early usage of maximum power does not lead to a performance advantage for the car on its fastest lap," it continued.

"Accordingly, the stewards feel that a sporting penalty is inappropriate in these circumstances."