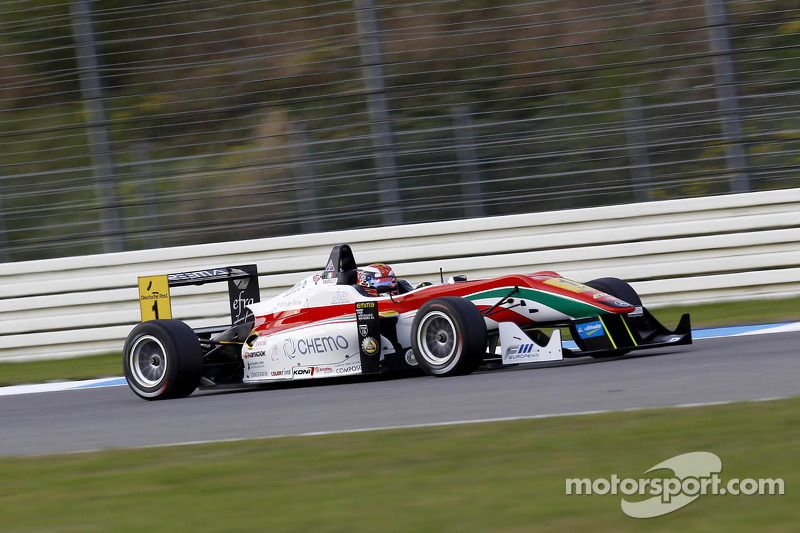 Raffaele Marciello won the 30th and final race of the season ahead of Felix Rosenqvist, who finished second. Lucas Auer claimed the final podium slot of the season.

Due to the heavy rain and the very wet track, the field started the final race of the season behind the safety car. As the green flags were waved after three laps, Raffaele Marciello remained in the lead. Felix Rosenqvist and Harry Tincknell (Carlin) followed until the safety car was deployed again after a collision between Luis Felipe Derani (Fortec Motorsports) and Eddie Cheever (Prema Powerteam) on lap six. The second restart didn’t cause any problems for Marciello either and the Italian remained in the lead until the chequered flag was out. Felix Rosenqvist, who concluded the season as runner-up in the drivers’ standings, crossed the finish line in second place.

Raffaele Marciello (Prema Powerteam)
“Conditions were really difficult. Partly, we couldn’t even drive flat out on straights. We had to be really careful not to make a mistake. However, I was confident about my car and myself. I really wanted to win this race after having sealed the championship title by finishing fourth yesterday. Concluding the season with the title and victory in the final race is nearly perfect.”

Felix Rosenqvist (kfzteile24 Mücke Motorsport)
“It wasn’t easy. When I was behind Raffaele, I could hardly see anything due to the spray. Halfway through the race, rain increased and I already thought that the race would perhaps be stopped. Generally, I had a nice battle with Raffaele. Unfortunately, I didn’t manage to score a triple, but I am happy with my weekend.”

Lucas Auer (Prema Powerteam)
“I had a nice battle with Harry Tincknell during which I tried to put him under pressure. Then, he made a mistake as he slid into the gravel trap going into the Motodrom, after which I got second place. I am happy to have concluded my maiden FIA Formula 3 European Championship season with a podium finish.”