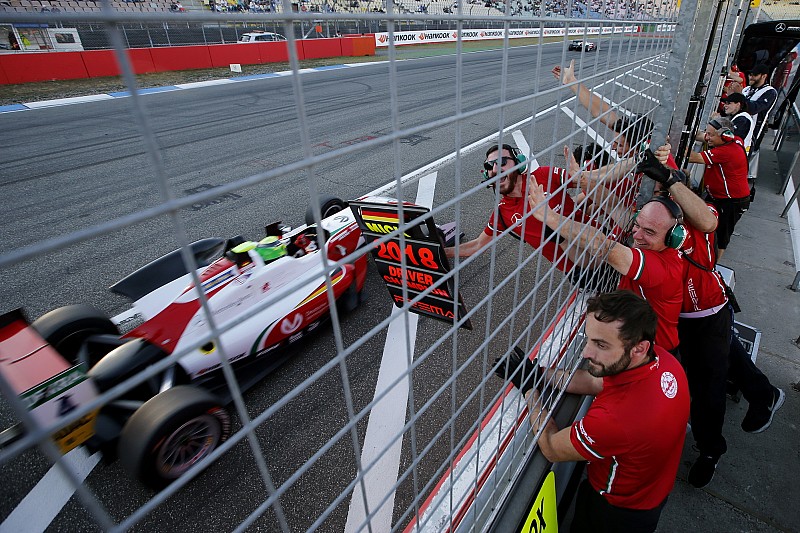 Mick Schumacher was crowned the Formula 3 European champion after finishing second to a dominant Juri Vips in the second race of the series finale at Hockenheim.

Schumacher put poleman Vips under pressure for the first quarter of the race, but then lost a big chunk of time on the seventh lap of 21 and, after a further lock-up at Mercedes Arena, had to focus his attentions on pulling away from Prema Powerteam stablemate Ralf Aron.

This he did to claim the title, while rival Dan Ticktum put in a gritty charge from 15th on the grid to take seventh.

The safety car emerged straight away after an incident on the run to the first corner ended with Sacha Fenestraz in the barriers, Julian Hanses in the gravel and Enaam Ahmed touring round to the pits with a puncture.

Motopark racer Vips had Schumacher filling his mirrors for a couple of laps after the restart, before Schumacher dropped back.

From then on, Vips gradually extended his margin to over four seconds, before finishing 3.4s clear of Schumacher, with Aron third.

A frantic scrap for third on the first lap between Alex Palou and Robert Shwartzman resulted in Palou diving down the inside of the Russian at Mercedes Arena wreathed in tyre smoke, and the opportunist Aron – from eighth on the grid – demoting both of them.

While Palou fell down the order to an eventual eighth in his Hitech GP car, the grid-penalised Fabio Scherer (owing to his incident with Ferdinand Habsburg in race one) rose from 12th to sixth, and got close to Shwartzman as the race entered the closing stages.

Ticktum, once he had passed Palou, also gained on Scherer, but ran out of time to catch his Motopark teammate for sixth.

Marino Sato ran in the top 10 early on, but conceded ninth to the sister Motopark car of Jonathan Aberdein when he ran wide at Turn 1, and then dropped down the order, so Carlin’s Nikita Troitskiy claimed the final point after holding off Guan Yu Zhou.

Marcus Armstrong, who dropped out of title contention in this morning’s race, was late away on the formation lap, started from the pitlane, and worked his way through the tailenders before a clash with Sophia Florsch ended his race.