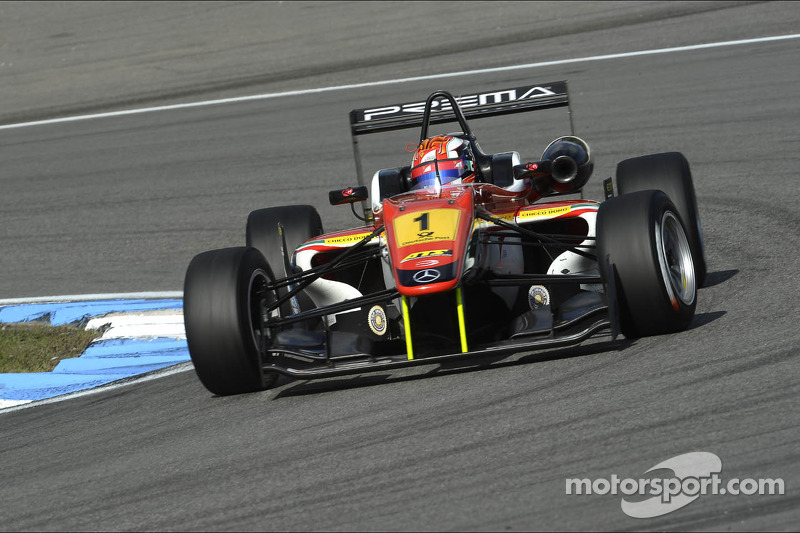 Raffaele Marciello won the 2013 title in the penultimate but tomorrow the European F3 driver will battle for the final bragging rights to end the season.

At Hockenheim this afternoon, Prema Powerteam's Raffaele Marciello finally clinched the 2013 championship in fine style after spending the second half of the season locked in a titanic struggle for the title with Felix Rosenqvist (kfzteile-24 Mücke Motorsport). Rosenqvist won this afternoon’s penultimate race, but Marciello did all he needed to claim the title. Meanwhile Alex Lynn (Prema Powerteam) and Lucas Auer (Prema Powerteam) claimed 2nd and 3rd on the podium at the end of another somewhat processional race.

At the start Rosenqvist knew he had no choice but to win the race and keep his hopes of being 2013 champion alive. He certainly made a perfect start to storm into the lead once again, while behind him Marciello seemed in no great hurry, knowing that 4th would be enough for him to take the title. Consequently it wasn’t too surprising that he let Lynn go and slotted into 3rd ahead of Auer, comfortably surrounded by his team-mates.

In the pack it was all a bit chaotic, with cars running wide but no actual contact fortunately. They all calmed down and settled in for the long haul of 22 laps ahead of them. At the front, though, Rosenqvist was pushing hard while Lynn attempted to hunt him down. That would be easier said than done however. Whatever else can or cannot be said Felix doesn’t seem to understand the concept of quitting and he wasn’t about to learn about it now!

As the charging Swede started to pull out a gap over Lynn, and Marciello sat there in 3rd, further back Luis Felipe “Pipo” Derani (Fortec Motorsport) relieved Eddie Cheever (Prema Powerteam) of 10th place, only to have Cheever take it back on lap 6. Felix Serralles (Fortec Motorsport) tried to go with the Italian but failed and lost a further place to Tom Blomqvist (EuroInternational) as a result.

As the race moved into the mid-stage it was starting to look as if Marciello was home and dry, though Rosenqvist lived in hope as he set a series of fastest laps and pulled away from the chasing Lynn. It didn’t look as if anyone – apart from Auer – would get close to Marciello, who was driving conservatively, trying to avoid any risks, even as Auer got closer.

In 5th, however, things were much closer, with Harry Tincknell (Carlin) building up a queue that included Antonio Giovinazzi (Double R Racing), Sven Müller (Van Amersfoort Racing) and Dennis van de Laar (Van Amersfoort Racing). Tincknell was hanging on for dear life, while behind him Müller finally got the drop on Giovinazzi to snatch 6th from him.

The procession then settled again, though there was a bit of a shuffle when Kevin Korjus (ThreeBond with T-Sport) was slapped with a drive through penalty for exceeding the track limits. He was followed almost immediately by Serralles, who was guilty of the same offence.

While they were doing that Andre Rudersdorf (ma-con) had managed to end his race by spearing off into a very large gravel trap, of which Hockenheim has many! However, everyone was now watching Korjus and Serralles as the pair of them tangled out on the track two laps after the penalties.

Serralles attempted to pass the Estonian into the Spitzkehre and it all got more than a little messy. The upshot was one damaged car out on the spot (Korjus) where he was then hit by Serralles and thrown into the air as the Puerto Rican tried to regain the track. Serralles finished the affair by launching himself on a kerb in a very odd accident.

Almost overlooked as that piece of silliness went on, Marciello had conceded 3rd to Auer, seemingly in no hurry to get to the flag, and unwilling to deny his young team-mate a podium place. Certainly it made no sense to resist the young Austrian, not when Tincknell, in 5th, was a long way back and 4th would be enough. And that was where he finished.

And so we have a new champion. Rosenqvist did everything he could to halt Marciello's march to victory, which had looked like a foregone conclusion in the early stages of the season as he pulled out a massive points lead, but Marciello knew what he needed to do to clinch it this afternoon and drove an intelligent race doing only what was absolutely necessary. He is champion by 0.5 points, Rosenqvist having clawed the gap back to 25.5 points, with a maximum of 25 left from tomorrow’s final race.

An improvement in form for the Mücke team after a somewhat shaky start to the year meant that at least Rosenqvist has kept Marciello honest all the way to the wire, but it wasn’t enough and the title is now "Lello's" as a superb season winds to a close with one more race tomorrow.

The battle will recommence a month from now at the 60th Macau Grand Prix where no doubt Rosenqvist will be looking for revenge.

Fastest lap of the race was set by Rosenqvist.