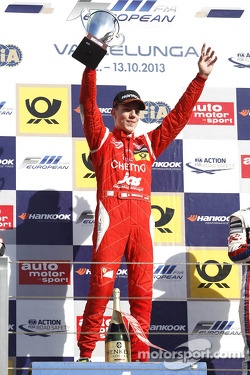 As Marciello’s toughest rival in the battle for the title, Felix Rosenqvist (kfzteile24 Mücke Motorsport), had to settle for finishing sixth, Marciello extended his championship lead to 45.5 points. Nonetheless, the fight for the title will be taken down to the season finale, held next weekend at the Hockenheimring Baden-Württemberg (D).

Particularly the opening stages of the third race of the weekend proved to be eventful: Roman Eddie Cheever (Prema Powerteam) didn’t get going at the start and Nicholas Latifi (Carlin) couldn’t avoid hitting him.

Later on lap one, Sean Gelael (Double R Racing) was pushed by an opponent into the side of Lucas Wolf’s (URD Rennsport) single-seater.

Both drivers went off onto the grass and had to retire. The incident caused a yellow-flag period.

Meanwhile, Marciello kept on extending his lead to celebrate his second win in front of his home crowds, in the end. Behind Derani, Alexander Sims impressed with a consistent performance. The Briton who races a Dallara powered by a ThreeBond Nissan engine made it to the podium in all the three races of the weekend.

Raffaele Marciello (Prema Powerteam): “Winning the race was important as Felix stood further back on the grid and so, this win this allowed me to re-extend my championship lead. Nonetheless, I’m aware that there still is a long way to go to the title. I learned at Zandvoort that even a big lead doesn’t mean you’re safe. Now I will focus on the season finale at Hockenheim to also give my very best, there.”

Luis Felipe Derani (Fortec Motorsports): “Actually, I did just the same as in the first two races. The two differences were my better position on the grid and the fresh set of tyres I had available for this race. It’s good to have made it to the points in all the three races of the Vallelunga weekend.”

Alexander Sims (ThreeBond with T-Sport): “To have made it to the podium in all the three races demonstrates the competitiveness of my team, ThreeBond with T-Sport. I’m convinced that they also have got what it takes to win a race but unfortunately, my grid positions just weren’t god enough to do so. In this race I had a good battle with Alex Lynn and made a minor mistake. Later, however, I was able to pass him, nevertheless, and finished third.”

Marciello wins race 3 over Derani and Sims at Vallelunga

Rosenqvist salvages crucial points with Italian fight back at Vallelunga