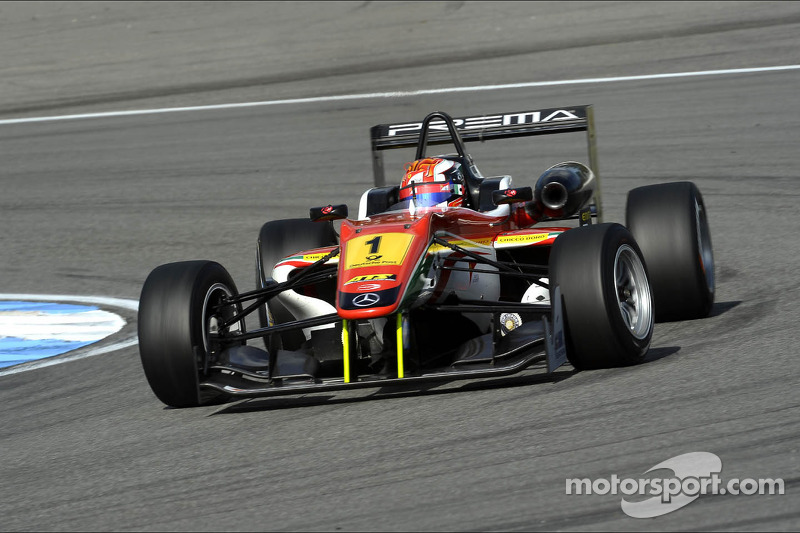 In truly vile conditions at Hockenheim, the FIA F3 Euroseries ended on a familiar note, with Raffaele Marciello (Prema Powerteam) being chased all the way to the finish by Felix Rosenqvist (kfzteile24 Mücke Motorsport), and being challenged repeatedly by the Swede. Third went to Lucas Auer (Prema Powerteam).

At the start it was sufficiently bad that the officials elected to start the race under the control of the Safety Car, and to keep the field behind it for two laps after that. It seemed a sensible decision based on just how much water was falling from the sky. It was obvious that whatever happened this was not going to go the full 22 laps, and would instead last 35 minutes – if all went well. 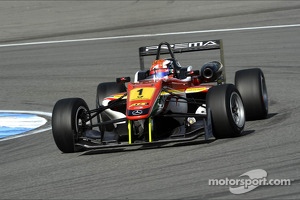 The race finally went live and we saw the first retirement, if you don’t count Stefano Coletti (ma-con) not actually starting. Lucas Wolf (URD Rennsport) had somehow managed to tear a wheel off his Dallara before they crossed the start line and limped round to the pits to retire. At the front, Rosenqvist moved out to take a look at his rival, but Marciello was too far ahead for an overtaking move to be possible. The Swede slotted back into 2nd, and concentrated on not skating off the track. Auer, meanwhile, was busy relieving Jordan King (Carlin) of 4th place while Harry Tincknell (Carlin) settled in to 3rd.

What could have been a very processional race promptly proved to be anything but as things started to get interesting in the pack. Felix Serralles (Fortec Motorsport) who was sent to the back of the grid after yesterday’s meltdown (as well as being disqualified from Race 2), was already up to 23rd, while Alex Lynn (Prema Powerteam) was up to 16th as he tried to make up for his disastrous qualifying (a broken floor putting paid to anything he might have hoped to achieve on Friday).

Meanwhile Tom Blomqvist (EuroInternational) was trying to take 6th from Nick Cassidy, the Kiwi standing in for Daniil Kvyat at Carlin. Another Carlin driver, Nicholas Latifi, was currently dropping down the order, while Mitchell Gilbert (kfzteile24 Mücke Motorsport) had a bit of an off that dropped him right back as well.

Blomqvist was soon through for 6th, and now Cassidy was being harassed by Antonio Giovinazzi (Double R Racing) who was having another strong run in what has been a learning season for him.

Much as yesterday it was the Spitzkehre where it all seemed to happen. Eddie Cheever (Prema Powerteam) and Luis Felipe “Pipo” Derani (Fortec Motorsport) clashed as Derani tried to pass the Italian. Cheever spun and Derani came to rest on the trackside with broken suspension. Cheever eventually got going again, but that was enough to get the Safety Car back out for a couple of laps. 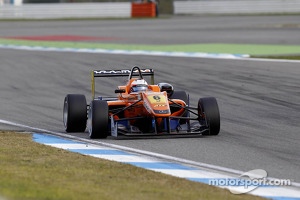 On lap 6 they let them loose again as the Safety Car pulled off and Marciello controlled the pack perfectly. We were 15 minutes into the race by now, and we’d only had three laps of actual racing. Perhaps the remaining 20 minutes might be a bit more interesting.

At the front Marciello proceeded to pull away again, his wheeltracks dogged by Rosenqvist every inch of the way. No one else could live with the pair of them and some people were in trouble anyway. Latifi pulled into the pits missing his rear wing, with Bryant-Meisner also retiring there and then. It was hard to know what had happened given how much spray was obscuring everything but given they had been 10th and 11th it didn’t take much of a stretch of the imagination to figure out that they had tangled.

Meanwhile Lynn had battled his way up to 12th and Serralles was now 18th. Towards the back, Cheever passed Zeller which wasn’t too difficult, while further up Giovinazzi was going after Cassidy quite hard now. A lap later and King ran very wide, losing a handful of places and ending up 13th, while Goddard and Calderon clashed at – you guessed it – the Spitzkehre. Goddard took a very wide line and turned in, only to find Calderon taking a very tight line. She hit him amidships and was out on the spot. Goddard managed to get going again but was now last.

Marciello and Rosenqvist continued to vanish into the distance while Auer was now very keen on taking 3rd from Tincknell. Just behind this battle Giovinazzi finally managed to take 6th from Cassidy, and just for good measure Mueller passed him as well. Oh, and Lynn was now all over van de Laar for 10th.

With Tincknell working very hard to keep 3rd it looked as if Auer might have to settle for 4th, but in the closing minutes the slippery track got the better of Tincknell and he had an unscheduled trip through the gravel, handing 3rd place to Auer and dropping himself back to 5th. He was lucky it wasn’t a lot worse.

It certainly was for Serralles, who had made his way up to 17th but then pitted and retired with around 7 minutes left to run. Rudersdorf, meanwhile, managed to spin out on his own, while Lynn took 10th from van de Laar. Cassidy also lost another place when Lewis caught and passed him and was then set about by Lynn. Elsewhere Zeller joined Rudersdorf in spinning off. It wasn’t improving at all out there. 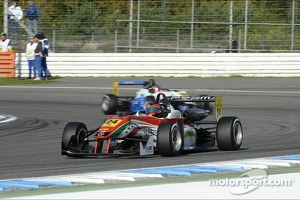 That didn’t seem to be deterring Marciello or Rosenqvist, who were even further ahead and about to start lapping the backmarkers, beginning with Goddard. Rosenqvist was edging ever closer to the leader too, and he kept looking for a way past only to be frustrated by the lack of visibility.

Lynn was now right with Cassidy, and there was little the Kiwi could do to prevent the more experienced man from coming through. Lynn had worked hard to get into the points, while King was doing much the same to get back up. He took 10th from van de Laar, and Mardenborough followed him through. As if that wasn’t enough, King managed to relieve Lewis of 9th, which made up for it all going wrong earlier.

In the final minutes van de Laar had a gravelly moment that cost him places, while Gilbert parked up trackside with no gears, his character building season ending much as it had begun. He’s not had the easiest of years; in fact it’s been a pig of a season for the Australian.

At the front, with less than a minute left, Rosenqvist was breathing down Marciello’s neck, the pair of them having lapped Goddard. As they came round for the last time, Rosenqvist pulled out, took a look, and pulled back in again. He couldn’t quite make it stick, but he didn’t give up, taking a look at claiming the lead one last time as they streaked towards the line, Marciello winning by the narrowest of margins. Auer was 3rd from Blomqvist, Tincknell, Giovinazzi, Muller, Lynn, King and Lewis. Mardenborough ended up 11th from van de Laar, Gelael, Korjus, Nissany, Cassidy, Cheever, Zeller, Rudersdorf and Goddard. Fastest lap of the race was set by Rosenqvist.