Mick Schumacher won the first race of the Formula 3 European Championship round at Misano after leading from pole position to the chequered flag. 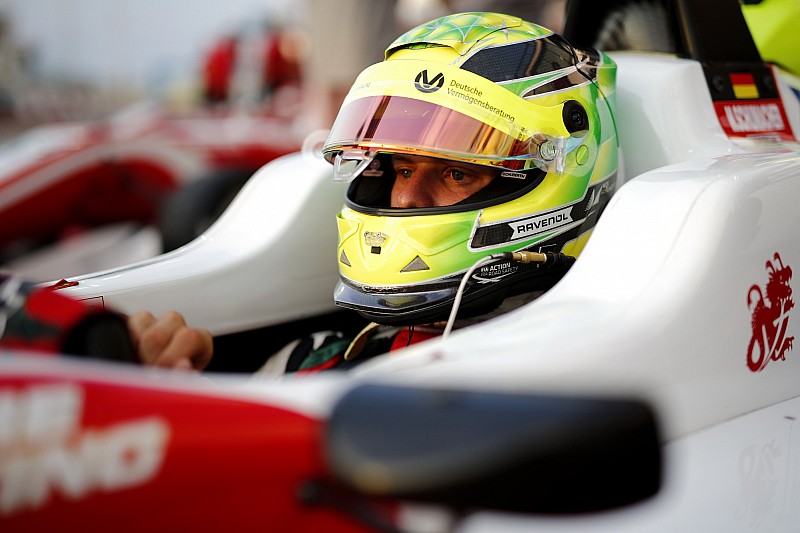 As he did in qualifying, Schumacher headed a 1-2-3-4 for the Italian Prema Powerteam squad, although he was pressured for much of the race by Marcus Armstrong.

With Armstrong “not getting a fantastic start”, Schumacher built a gap of 1.571 seconds on the opening lap, and the interval to Armstrong remained similar for half the race, with the New Zealander planning to save his tyres for the second half of the race due to the hot conditions.

With seven laps remaining, Armstrong brought the gap down to 1.061s, but over the last few laps Schumacher extended it again, building an advantage of over 2s on the final tour.

“On the first lap I got a decent gap and controlled the tyres, controlled the gap – similar to Silverstone [where he also won], it worked out pretty well.”

Attention for much of the race focused on the battle for third, between Robert Shwartzman and Guan Yu Zhou.

Shwartzman made a better start than third qualifier Zhou – who set the quickest qualifying time but lost it due to a track-limits offence – but the Russian had to hang it around the outside of the left-handed Turn 2 before claiming the position at the Turn 3 right-hander.

Zhou kept the pressure on, occasionally feinting a move, before a lock-up at Turn 10 just before half-distance caused him to drop back.

Zhou closed up again in the closing laps, but Shwartzman held on to complete the podium.

Championship leader Dan Ticktum lost out in the battle for fifth with Motopark teammate Juri Vips, narrowing his points advantage to Armstrong.

Vips pulled off a great manoeuvre on Jehan Daruvala at the Turn 11 kink on the opening lap to claim sixth, then closed in on Red Bull junior Ticktum, who in turn was shadowing the battling Prema duo in front.

On the 13th lap of 24, Vips got a run on Ticktum and bravely squeezed down the inside of Turn 11, before completing the move at the following Turn 12.

Ticktum fell away thereafter, and had seventh-placed Prema driver Ralf Aron right on his tail as they crossed the line.

Alex Palou put in a great performance from 12th on the grid in his Hitech GP car, passing Sacha Fenestraz, Jonathan Aberdein and finally Daruvala to finish eighth, right in Aron’s mirrors at the fnish.

Apart from Palou, it was a grim race for Hitech, with Enaam Ahmed dropping to the tail of the field due to a collision with teammate Ben Hingeley just after being passed for 12th by Habsburg.

Hingeley was given a drive-through penalty, promoting Ahmed one position.