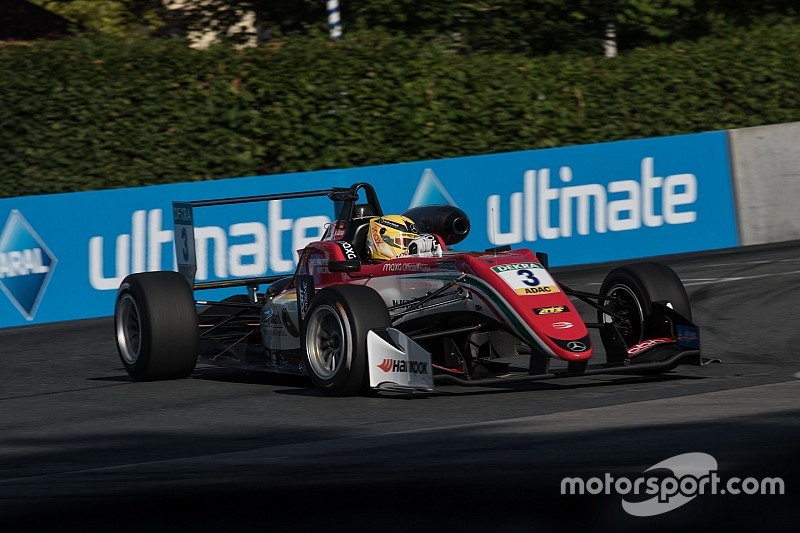 Maximilian Gunther won a thrilling opening race of the Formula 3 European Championship round at the Norisring after a late-race collision between Jake Hughes and Lando Norris.

Hughes had controlled the race beautifully from pole position, his Hitech GP car leading a queue of eight in the early stages while Norris recovered after losing places from his front-row start.

McLaren-Honda protege Norris had dropped to fourth at the start, but he inserted his Carlin machine down the inside of Pedro Piquet for third at the Turn 1 hairpin on the second lap.

Norris then attacked Gunther for second, but the Bavarian Prema Powerteam ace – racing on home ground – stabilised his position and was shadowing Hughes when a full-course yellow was called on lap 17.

Joey Mawson had been embroiled in a massive fight with Van Amersfoort Racing team-mate Harrison Newey for seventh, but contact with Jehan Daruvala at the chicane sent Australian Mawson smashing into the outside wall.

Once the race went green, Norris took a lap before lancing down the inside of Gunther to take second place at the Turn 1 hairpin.

Within a few laps he was attacking Hughes for the lead, probing for openings all around the circuit, which in turn allowed Gunther, Piquet and Guan Yu Zhou to close up.

A challenge from Gunther on Norris in turn allowed Hughes some breathing space, before Norris began to close the gap again.

On lap 32, Norris got into Hughes’s slipstream and moved to the inside to try for the lead, but that put him onto the dust and, seemingly powerless to brake, he shovelled Hughes into a spin, which ended with the Hitech car taking a large hit rear-end first into an access-road tyre barrier.

As Gunther and Piquet slipped past, Norris rejoined in third, just in front of Zhou, but there was another brief FCY while the wreckage was cleared.

That left five laps of green-flag racing in which Gunther was largely untroubled, as Norris threw everything into passing the VAR car of Piquet.

He succeeded with a lap to go when he slipstreamed past on the start-finish straight, but his second place on the road was converted to 11th with the addition of 20 seconds – in lieu of a drive-through penalty called on the last lap – for the clash with Hughes.

That promoted Piquet and Prema driver Zhou to second and third, while pre-race championship leader Joel Eriksson stormed through to finally take fourth in his Motopark car after starting on the back row.

For title contender Callum Ilott, it was a disastrous race.

He was tipped into a spin at the start by Ferdinand Habsburg, who had tripped over the slow-starting Norris, and this left Ilott leading a much-delayed group of five cars at the back.

Ilott gradually caught up the midfielders, only to spin Keyvan Andres Soori around at Turn 1, retiring to the pits with damage to his front end.