Lando Norris has been stripped of his pole position for the final race of the Spa Formula 3 European Championship round after being found at fault for the first-lap collision that eliminated himself and Guan Yu Zhou.

Norris has been given a grid penalty of three positions, meaning he will start Race 3 from fourth place.

It moves Callum Ilott onto pole position, with Zhou and Maximilian Gunther completing a Prema Powerteam 1-2-3 in the line-up.

The accident happened after Ilott had slipstreamed past Norris on the Kemmel straight, with Zhou also completing most of a manoeuvre to take second place around the outside at Les Combes.

“It was my mistake basically,” admitted McLaren-Honda protege Norris.

“I just didn’t know what to expect because I hadn’t yet gone into Turn 5 [Les Combes] following someone [Norris led all the way to victory in race one].

“I had Gunther right behind me, I was right on Callum, so I had to wait until Gunther braked until I could brake, because he might have hit me.

“Just as I turned in I locked the front-right up, which made me understeer and run wide, and I tagged ‘Joe’ [Zhou] – I apologised to him.”

But Norris believes that the penalty should not pose too much of a problem in fighting for the win, citing Carlin teammate Ferdinand Habsburg’s drive to victory in race two from eighth on the grid.

“Hopefully I can do something like that – it should be a fun race!” he said. 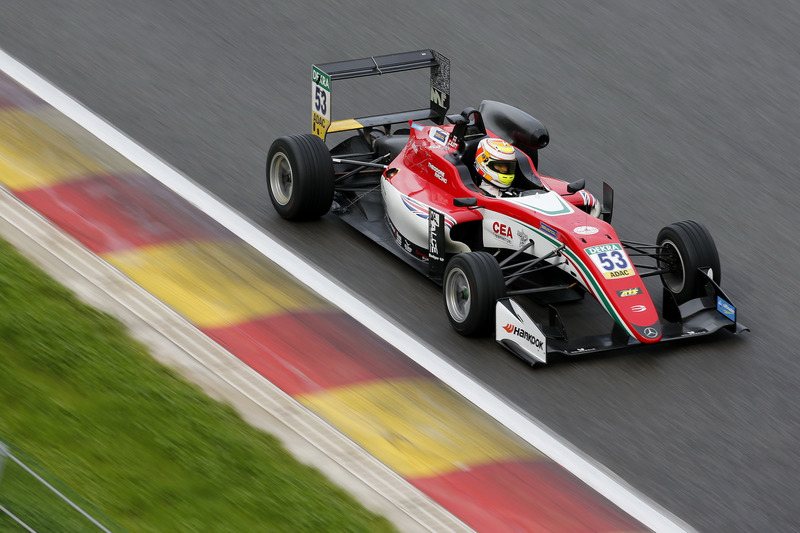 Meanwhile, Ilott has revealed that the first-race accident in which he collided with Jake Hughes, ending Hughes’s race and invoking a drive-through penalty for Ilott, began with contact with Norris.

Ilott was trying to pass Norris for the lead around the outside of Les Combes, before running wide and crashing into Hughes as he was launched over the kerb at the left-hand apex.

The Prema driver said that camera angles did not show the initial contact with Norris.

“There wasn’t any space, and his left-rear touched my right-front,” said Ilott.

“Then, as I went over the apex kerb, the car shot over to the right and I hit full throttle [from the jolt]. I had no control and I’m sorry to Jake.”

Ilott’s fade from the lead of Race 2 to seventh place was caused by a bad handling imbalance, which seems likely to have been caused by a wire detaching itself from the diffuser, which in turn led to a major drop-off in tyre performance.