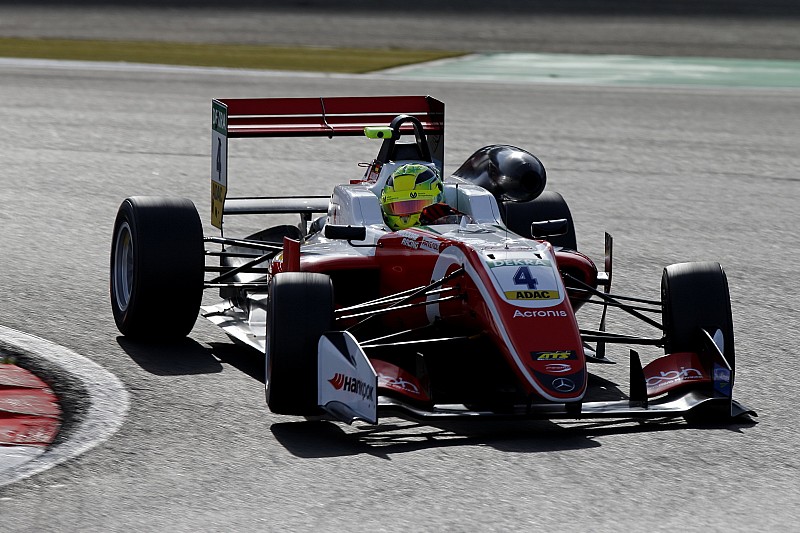 Mick Schumacher became the first driver of 2018 to complete a European Formula 3 weekend hat-trick with another supreme performance in the Nurburgring finale.

Schumacher had to dart across to protect the inside line from the sister Prema Powerteam car of Robert Shwartzman on the run to Turn 1 but, as he has done all weekend, showed crucial superiority over the Russian on cold tyres to build a 1.2-second lead by the end of lap one.

From then on Schumacher extended his advantage by incremental margins on most laps, finally taking the chequered flag 4.9s clear of Ferrari protege Shwartzman, who in turn took his third runner-up position of the weekend.

Unlike in races one and two, when Dan Ticktum was the closest challenger to the dominant Prema duo, this time it was Alex Palou who posed the stiffest threat.

Ticktum had run very wide at Turn 1 in his Motopark car, and was then very tight at Turn 3, running wide on exit and allowing Palou into third.

Hitech GP driver Palou put pressure on Shwartzman at various stages of the race, but the Catalan never got into a position to pose a serious threat.

Ticktum dropped back in fourth, and now finds himself just three points clear of Schumacher at the top of the championship standings with two rounds remaining.

Marcus Armstrong was a race-long fifth in his Prema car, while Juri Vips at last got some points on the board for the weekend with sixth in his Motopark machine.

Eighth qualifier Vips got ahead of Ralf Aron at the start, and then took advantage of Sacha Fenestraz challenging Armstrong at the beginning of the third lap to pass the Frenchman for sixth.