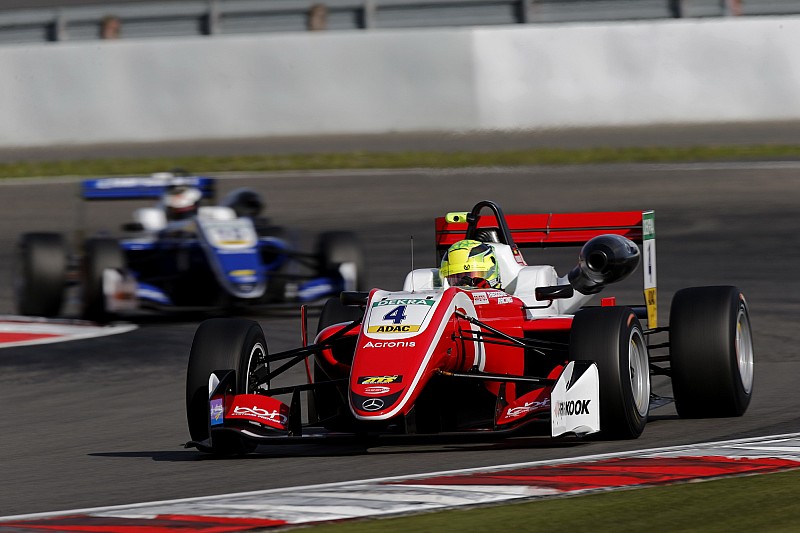 Mick Schumacher continued his domination of the Nurburgring European Formula 3 round by taking his second win of the weekend.

From pole position, Schumacher was never headed in his Prema Powerteam Dallara-Mercedes as he defeated teammate Robert Shwartzman and Motopark’s Dan Ticktum in a repeat of the first-race podium.

Schumacher made a good start to lead before, as with Saturday’s race, the safety car emerged due to a Turn 1 incident.

Once again title contender Juri Vips was an innocent victim, the Estonian this time getting turned around by Enaam Ahmed in a collision that left Ahmed stranded on the track and Vips continuing at the tail of the field.

Shwartzman had no answer at the restart to Schumacher, who opened a one-second advantage within a lap, and was 2.5s to the good when there was another safety car late in the race.

This was again caused by a Turn 1 shunt, when Marino Sato harpooned Ben Hingeley out of 12th place in a collision that took both out of the race.

This time Schumacher was 1.3s up at the end of the first lap of green-flag racing, and he reeled off the laps to finish 3.2s up on Shwartzman.

Championship leader Ticktum got close to Shwartzman, and even had a tentative glance at Turn 1 with two laps remaining, but the Red Bull Junior settled for another podium, and sees his points advantage over Schumacher cut to 16 points.

Palou was part of the most exciting episode in the race when, after the final restart, he was challenged at Turn 1 by Jonathan Aberdein.

This in turn encouraged Sacha Fenestraz to attack Aberdein, and led to a massive midfield bunching from which Guan Yu Zhou gained two places to leap from 10th to eighth by passing Fenestraz and Sebastian Fernandez.

Fernandez, who had been running ninth, sailed down the escape road at the Turn 5 cut-through with a left-rear puncture.

It all shook out with Aberdein (Motopark) taking seventh from Zhou (Prema), and Carlin duo Fenestraz and Ferdinand Habsburg.