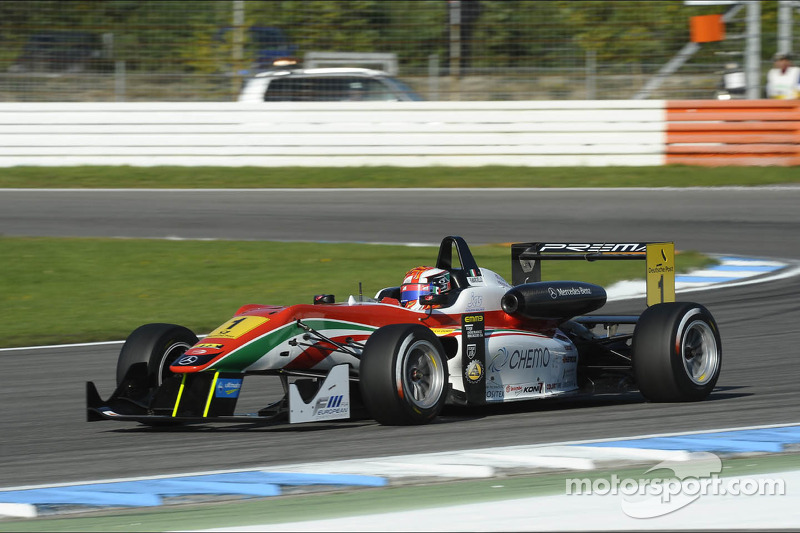 Although Felix Rosenqvist (kfzteile24 Mücke Motorsport) also won the second race of the final weekend of the season at the Hockenheimring Baden-Württemberg, he couldn’t prevent the early title win by Raffaele Marciello (Prema Powerteam). For the Italian, a protégé of the Ferrari Driver Academy, fourth place was enough to claim the FIA Formula 3 European Championship title. In the 29th race of the season, Alex Lynn (Prema Powerteam) was classified second, Lucas Auer (Prema Powerteam) ended up third.

At the start, Felix Rosenqvist took the lead from pole position while Raffaele Marciello, who started from second place on the grid, lost one position to Alex Lynn. The Italian only slotted into third place on the way to the first corner. Out in front, Rosenqvist pulled clear and drove an undisputed lights-to-flag victory home. 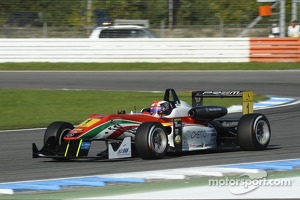 Behind Rosenqvist, Alex Lynn was delighted with second place. Thus, the Brit secured third place in the FIA Formula 3 European Championship drivers’ standings. In Lynn’s slipstream, Marciello was beaten by team-mate Lucas Auer (Prema Powerteam) on the way to the title, but fourth place also was enough for the newly-crowned European champion to seal the title.

Harry Tincknell (Carlin) took the chequered flag in fifth place behind Marciello. Sven Müller (Van Amersfoort Racing) was the best-placed German driver in sixth. To achieve that, he had to beat Antonio Giovinazzi (Double R Racing) in a duel, who had initially been running in sixth place. British driver Jordan King (Carlin), Dennis van de Laar (Van Amersfoort Racing) from the Netherlands and Italian Eddie Cheever (Prema Powerteam) rounded out the top ten.

Felix Rosenqvist (kfzteile24 Mücke Motorsport)
“It was a strange race, because I actually made a lot of mistakes, but I was still able to maintain the lead. Winning the race was all I could do. From that point of view, the weekend has been perfect so far, but still, I am not happy, because I wanted to keep the battle for the title open until tomorrow. But now, I congratulate Raffaele for winning the title, his season was better than mine. I will learn from it and come back stronger next year, wherever I will be racing then.”

Alex Lynn (Prema Powerteam)
“My start was good and I was able to overtake Raffaele without any problems. Then, I tried to put Felix under pressure, but when I got a warning for exceeding the track limits, I took it a little bit easier. I was consistent and quick, but Felix was a little quicker.”

Lucas Auer (Prema Powerteam)
“My start was relatively good and I had a good opening lap. Later on, I was able to overtake Raffaele without any problems, because fourth place was enough for him. Thus, he didn’t have to defend at all. Congratulations to him and to our Prema Powerteam.”

Raffaele Marciello (Prema Powerteam)
“It is unbelievable, I am the European champion. I really don’t know what to say. In the race, I was very cautious, because I didn’t want to risk a penalty. But I didn’t have to either, because fourth place was enough for me to seal the title. Admittedly, I didn’t win this race, but I still won the title, and that surely isn’t bad either.”