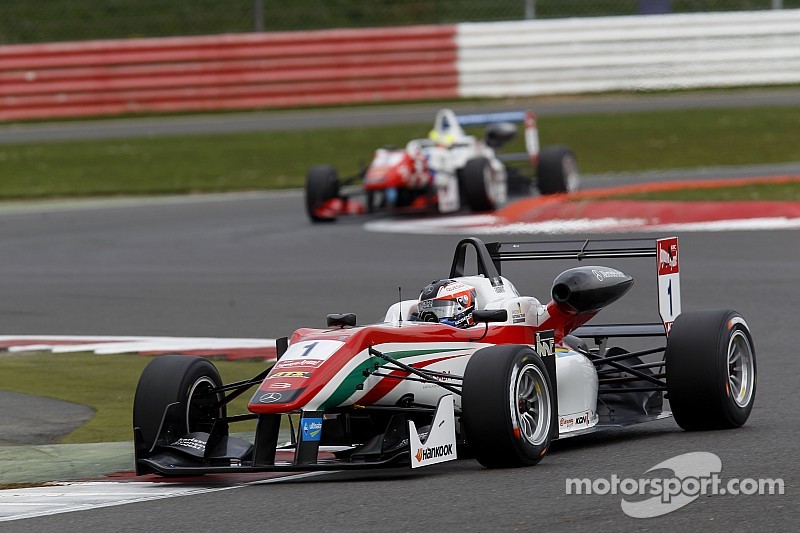 Felix Rosenqvist took a lights-to-flag victory in the first European Formula 3 race of the season at Silverstone, surviving two caution periods to hold off Antonio Giovinazzi for the win.

The field began under the Safety Car in damp conditions at the Northamptonshire track, and poleman Rosenqvist comfortably led the ensuing rolling start from fellow front row starter Giovinazzi and Jake Dennis as chaos broke out behind.

An ill-judged passing attempt at Club on the opening tour by Charles Leclerc on George Russell saw the pair make contact - an incident in which Brandon Maisano and Kang Ling also were caught up, resulting in the Safety Car being deployed.

Consequently promoted to fourth was Lotus junior Alex Albon, who clambered all over the back of Dennis at the restart as Rosenqvist and Giovinazzi escaped together at the head of the field.

Dennis however remained steadfast in his defence until the Safety Car re-emerged in response to Alessio Lorandi parking his car in the gravel at Luffield, the caution periods meaning that the race would time out with three of the scheduled 18 laps remaining.

Rosenqvist was able to hold off Giovinazzi in the closing stages after the second restart to take victory by nine tenths of a second, while Dennis finished 2.6s adrift in third ahead of Albon.

Reigning German F3 champion Markus Pommer came home fifth, having jumped ahead of Ferrari-backed youngster Lance Stroll at the start, with Gustavo Menezes taking seventh ahead of a recovering Russell.

Maximilian Gunther and Red Bull’s Callum Ilott rounded out the top 10, ahead of Pietro Fittipaldi and Leclerc, who has been promoted to pole position for the two remaining races after Rosenqvist’s qualifying times were deleted yesterday evening as a result of a bodywork infringement.