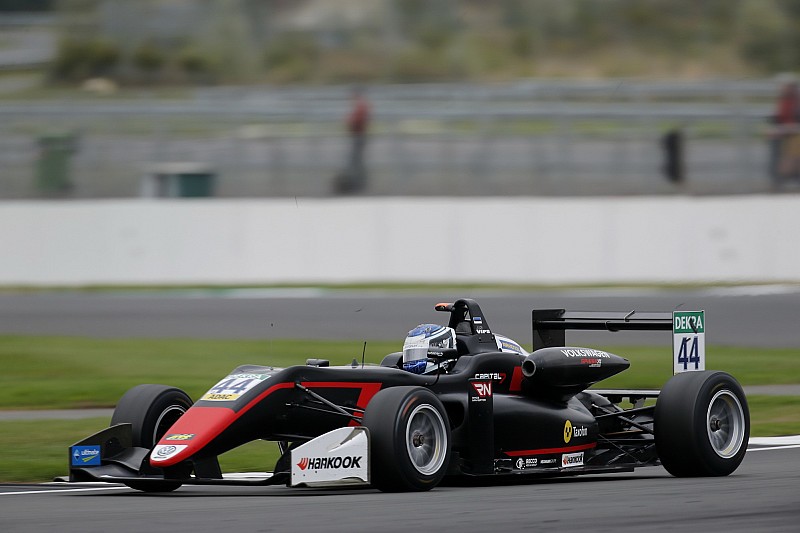 Estonian rookie Juri Vips scored his second Formula 3 European Championship victory from pole position in the final race of the weekend at Silverstone.

Vips fought off first-lap challenges from Jonathan Aberdein and Sacha Fenestraz, and from then on was never headed.

Front-row qualifier Aberdein got a better start than the sister Motopark Dallara-Volkswagen of Vips and nosed up the inside into the Abbey right-hander, but backed off to avoid contact and was dumped to third by Fenestraz.

Renault Formula 1 junior Fenestraz then got a run on Vips down the Wellington Straight, just about getting in front with his Carlin car, but Vips claimed the inside line into Brooklands and retained the lead.

“I braked really late and he braked later than me,” said Fenestraz. “We were lucky to make the corner.”

An early safety car, caused by Sebastian Fernandez taking himself and Ralf Aron out at Club, failed to disrupt Vips.

The leader eased the gap out to over a second, but as the race wore on Fenestraz began to close, although never got close enough to mount an overtaking bid.

“It was actually very difficult,” said Vips, who moves up to third in the championship.

“Sacha got past me, but I managed to overtake him into Turn 6 [Brooklands], which was crucial.

“I was struggling – similar to the Prema cars in race one – with my rear tyres, particularly towards the end, but I’m happy and this is a good confidence boost.”

A stunning first-lap battle for fourth was resolved in favour of Enaam Ahmed, and the Hitech GP driver held the position until the finish.

After challenging Aberdein for third, Ahmed lost momentum and was passed in the middle of the Becketts complex by points leader Dan Ticktum.

But Ticktum was slow onto the Hangar Straight, allowing Ahmed back in front in a three-abreast move also involving Mick Schumacher.

Ticktum tried to repass Ahmed at Club, but launched onto two wheels over the inside kerb, allowing Schumacher past.

Try as he might, Motopark man Ticktum couldn’t overtake the Prema Powerteam car of Schumacher as they completed the top six.

Hitech’s Alex Palou was seventh, ahead of the Prema car of Guan Yu Zhou.

A good battle for ninth went the way of Ferdinand Habsburg (Carlin), who fended off Robert Shwartzman (Prema), who in turn had come out best in an earlier scrap with Fabio Scherer.

Despite finishing sixth, Ticktum extends his championship lead to 18 points over Marcus Armstrong, who was forced out wide at the Farm kink on the opening lap and into retirement.