Verstappen holds off Ocon for 2 out of 2 at Spa

Third place went to another of the Van Amersfoort boys in the shape of Gustavo Menezes.

At Spa on Saturday afternoon, Max Verstappen (Van Amersfoort Racing) claimed his second win of the weekend, beating home series leader Esteban Ocon (Prema Powerteam) in a tense race on this most demanding of circuits. Third place went to another of the Van Amersfoort boys in the shape of Gustavo Menezes.

Before the race even started we were down a driver however, Santino Ferrucci (Eurointernational) would have to miss what would have been his second ever race because of damage sustained in race 1 when he clashed with Antonio Giovinazzi. The resulting wreck was too severe for the team to complete the necessary repairs in the available time.

At the start Menezes, who was on pole, got away into the lead, while behind him Ocon got the drop on Verstappen and was 2nd, but then a mistake from the leader on the run into Les Combes cost the American dearly as he got it wrong and went straight on. Race 1 showed that Verstappen knows exactly what he’s doing through this section, and so it proved as he came out ahead of his team-mate, having passed Ocon on the straight. As Menezes tried to sort himself out, Ocon went through as well, still looking for a way through for the lead. Verstappen wasn’t having any of it… 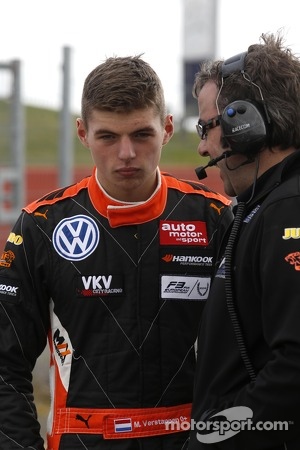 That left Menezes 3rd, a position that the whole of the field seemed to want to relieve him of. Or at least that must have been how it felt to him. He came under sustained attack from Felix Serralles (Team West-TecF3) who stole 3rd from him, only for Lucas Auer (kfzteile24 Mücke Motorsport) to join in as well just as Menezes got the place back.

Behind them Alexander Toril (ThreeBond with T-Sport) was coming under pressure from Tatiana Calderon (Jo Zeller Racing) for 8th place, the Spaniard losing out to the Colombian woman on lap 6. A Jo Zeller car has never been this high up the order, proving just how much Tatiana loves Spa. Her next target was John Bryant-Meisner (Fortec Motorsport) and she was through for 7th.

The Carlin boys were on the move too… Jake Dennis was the next driver to pass Toril, claiming 9th, while Tom Blomqvist, in the Jagonya Ayam liveried version was soon 12th having dispatched another Carlin driver, Jordan King for 13th, King running with a wobbly looking wing, and then Hector Hurst (Team West-TecF3) as well.

Verstappen was pressing on at the front, pursued by Ocon, although the Frenchman wasn’t about to take too many risks after his non-finish in the first race. Behind them the battle for 3rd raged on between Menezes, Serralles and Auer. And then it all went wrong. An opportunistic attack around the outside at Les Combes by Auer saw the Austrian run wide and lose control. A passenger now, he shot back onto the circuit and rammed Serralles, launching the Puerto Rican who ended up in the barriers. Both drivers were OK, but the Safety Car was needed. 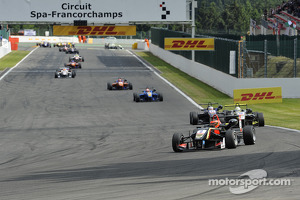 Verstappen settled in for his second Safety Car period of the day, Ocon still behind him, Menezes remaining 3rd from Felix Rosenqvist (kfzteile24 Mücke Motorsport), Calderon, Bryant-Meisner, Dennis, Toril, and Blomqvist. The clean up took a while, and at the restart there were just four laps left, a fact the leaders were clearly well aware of. Verstappen held onto his lead despite pressure from Ocon through Les Combes, while Menezes had his hands full with Rosenqvist.

The battle for 5th didn’t last long, Calderon opening a gap as Bryant-Meisner became embroiled in a ferocious fight for 6th, Dennis in particular, having started the race from 21st, seemed unstoppable and was determined to find a way past the Swede by whatever means presented itself. Blomqvist, Toril, Antonio Giovinazzi (Jagonya Ayam with Carlin) and Nicholas Latifi (Prema Powerteam) were also all in the mix, as was King. With very little time left Dennis went for it, and that was when the battle went decidedly pear-shaped.

Toril shoved Bryant-Meisner off, handing 6th to Dennis. Toril was out on the spot just two laps from the flag, while JBM limped round to the finish at the tail end of the field in 18th place. The beneficiaries were Latifi, Blomqvist, Giovinazzi and King who all moved into better points scoring places in 7th, 8th, 9th and 10th respectively. At least this time no Safety Car was needed and Verstappen continued round to his second win of the day, less than a second ahead of Ocon, who was happy to collect more points.

Ocon set the fastest lap of the race.

Full house for Verstappen at Spa