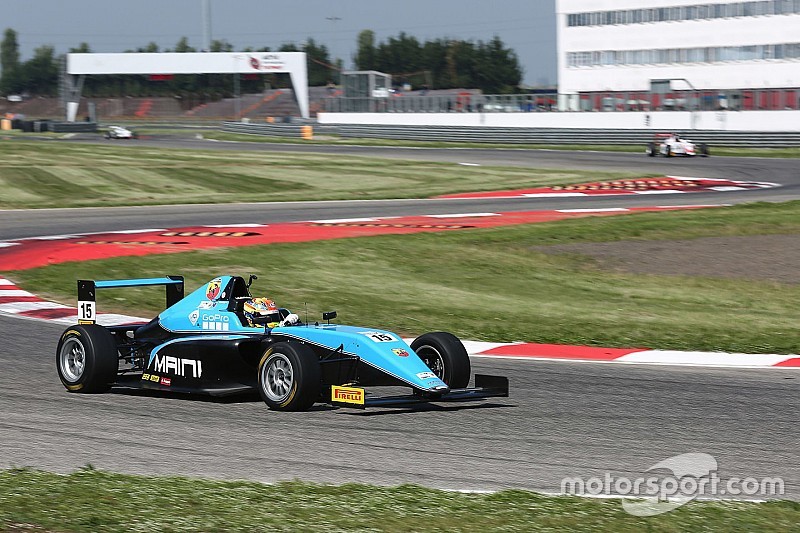 Kush Maini secured a best result of fourth in the second round of Italian F4 Championship at the Adria International Speedway.

Maini qualified sixth for the first race of the weekend, but was forced to start from 12th due to a penalty carried forward from the opening round of the season.

Despite being in the thick of the midfield in treacherous weather conditions, Maini was able to steadily make his way up the field, without falling prey to the damp track.

The 16-year-old first dispatched DR Formula’s Artem Petrov, before reeling in Sophia Floersch to move inside the top 10.

Over the remainder of the 19 lap race, he continued with his overtaking spree, passing Leonardo Lorandi on the 15th tour to take the fourth spot.

However, by the final quarter of the race, the top-three runners had established a buffer over the rest of the field, forcing Maini to settle for position.

Although the second race took place under similar conditions, with drivers greeted to a wet but drying track, Maini was unable to repeat his Race 1 heroics.

The Bangalore-born driver held onto his grid spot of ninth in the early stages of the race, before Petrov shot to eight with a double overtake over the Indian and Enzo Fittipaldi.

With Petrov streaking ahead, Maini indulged himself in a duel with Fittipaldi for ninth spot. The two drivers fought tooth-and-neck, before the Brazilian got his nose ahead on Lap 13.

The Indian, however, would go on to finish eighth after Armstrong and Colombo crashed, elevating him two positions in the finishing order.

At the front of the field, Lorandi took the chequered flag from Van Uitert, with Lirim Zendeli crossing the line in third place.

The final race of the weekend took place predominantly in dry conditions, although parts of the track were still wet.

Maini jumped to eighth on the opening lap, before falling behind Petrov as the Indo-Portuguese duo were again involved in a scrap.

However, the DR Formula driver was forced to retire early on, handing eighth place back to Maini.

The Jenzer driver held on to that position until the chequered flag, but was promoted to seventh after Ian Rodrigues was given a post-race 10 second penalty.

Meanwhile, Colombo cruised to a comfortable two second victory, with Van Uitert continuing his rostrum record in second. The third spot on the podium went to Armstrong.

Amputee Monger determined to “take the positives” from situation