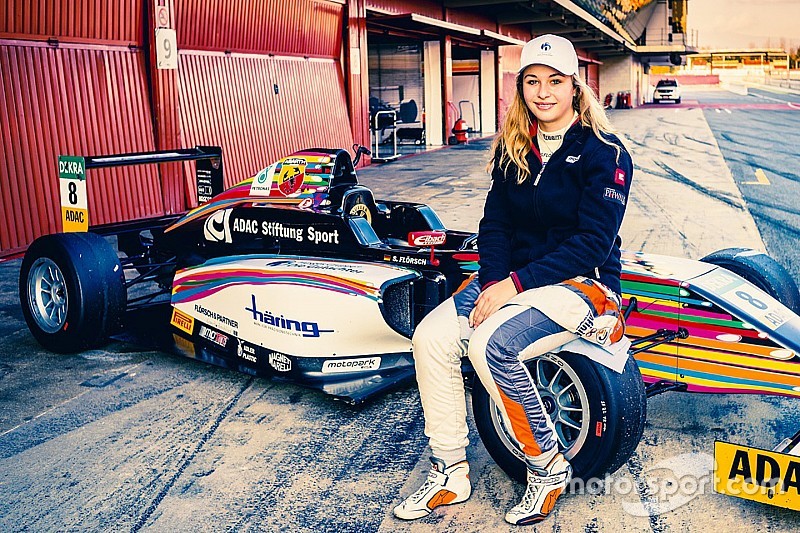 German racer Sophia Floersch will contest her debut season in single-seaters in the ADAC F4 series in 2016.

Floersch, 15, rose to prominence by taking a double victory in the UK-based Ginetta Junior series at Thruxton last year - and was the championship's top-placed rookie when she called time on her campaign early.

She tested extensively in preparation for a planned switch to ADAC F4 in 2016 - and has now confirmed she will tackle the series with Oschersleben-based squad Motopark.

"My first target is just to finish every race and try not to crash!" Floersch told Motorsport.com. "Then I’d like to be in the top eight or 10 for the first few races, and then I can aim to be in the top five.

"I want to win the rookie championship this year, try to get some podium finishes and maybe one or two wins by the end of the year."

Elaborating on the reasons behind the choice of team, Floersch noted: "[Motopark] was the first team I'd ever driven a single-seater car for, in 2012.

"They invited me to learn to drive an ADAC Formel Masters car on a runway, just to learn how everything works.

“So I’ve known the team for a long time. My dad gets on well with the team boss as well, and they made us a good offer."

Floersch has also confirmed that a move to Formula 3 would be the next logical step after her German F4 campaign - but said it would depend on results.

"Of course, the F4 car is completely different to drive," she said. "With the Ginetta, the brakes are soft, the steering isn’t very responsive and it accelerates quite slowly.

"In the F4 car you have to be much more aggressive, or you won’t be quick enough."

The German racer also noted that she isn't worried about being out of practice, despite not having raced competitively since June.

"The thing that I found toughest about Ginettas was how hot it got inside the cockpit, but when I stopped racing in the summer, I started training more, so I’m fitter now.

"I’m not really worried about not having raced since the summer – the biggest thing to learn will be to not touch other cars!"

Maini Q&A: "I will be targeting top 5 in both championships"