How does Formula 4 help the U.S. open-wheel scene? 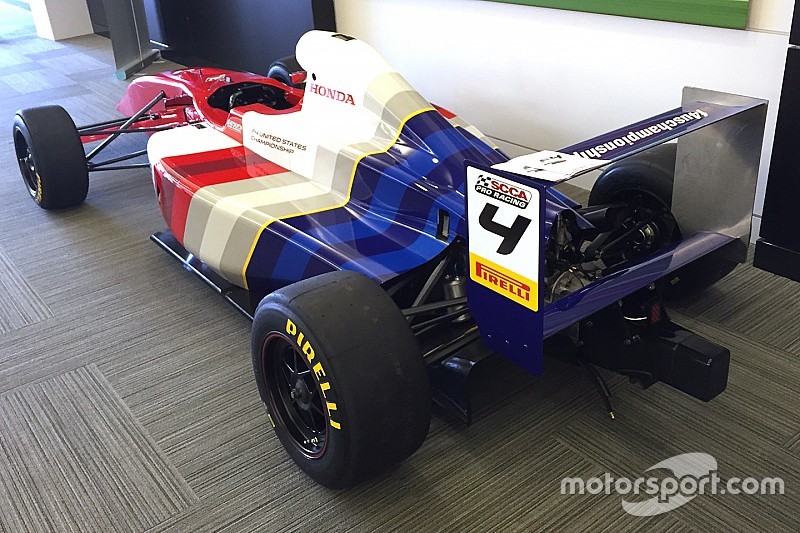 No one’s saying the Mazda Road To Indy is a bad thing, and no one would say that confusing the U.S. junior open-wheel market is a good thing. But many believe there is a niche – maybe more than one – for those young drivers whose ultimate aim is either the Verizon IndyCar Series or Formula 1.

At the PRI Show, the Crawford Composites-built US Formula 4 car was put on public view and adjacent to it sat the Formula Lites machine (also a Crawford product) with its new-for-2016 engine – the two-liter turbocharged four-cylinder unit from the Honda Civic Type R. It’s detuned from 306hp to approximately 260hp for the Lites machine, and it comes devoid of turbo for the 158hp F4 car, which also doesn’t have the FLites’ diffuser.

Robert Clarke (coincidentally a former head of HPD), is now the SCCA’s VP of business development as well as chairman of the Pro Racing division. He tells Motorsport.com that Formula 4 in particular has filled a clear gap in modern junior open-wheel racing.

“I don’t actually see F4 as a competitor to anything that’s currently on the Mazda Road To Indy,” says Clarke. “I believe F4 has a much broader objective than just driving people to more powerful open-wheel cars; it’s so affordable that it’s the step between karting and what you might term as ‘big cars.’”

Clarke knows whereof he speaks, in that once upon a time he was one of those kids hoping to become the next Dan Gurney or A.J. Foyt. But rather than think in terms of ‘it was all better and cheaper in my day,’ Clarke actually believes in terms of value, old and new are very much in sync.

“When I started in racing, I bought my first Formula Ford – a 1967 Lotus 51 – for $4,500,” he observes. “Different times, different world… but I believe F4 now is what Formula Ford once was. It’s very much price-capped at $51,800, it’s entry-level format, restructuring open-wheel in a way that encourages drivers to move on up.

“But interestingly, $4,500 in today’s dollars would be about $32k, whereas F4’s price in ’67 would be $7,250. That was about the price of the twin-cam engine Formula B car back then. Now when you consider the huge difference in technology involved in the car, that makes Formula 4 amazing value at $52k, I’d say.”

The obvious difference – obvious even to the layman – between yesteryear’s Formula Fords and the F4 car is that it comes equipped with wings front and rear. That, Clarke believes, is vital.

“The wings aren’t adjustable,” he says, “so they don’t do a lot aerodynamically, but they’re there for appearance. They give the car a Formula 1-type image which will lure kids and hopefully help them to lure sponsors. It looks how people believe a real racecar should look.”

If this most junior of junior open-wheel categories has gone and gotten all grown up, its adolescent sibling is targeted rather differently.

“Formula Lites is another story,” Clarke muses, “because when you reach that level, it’s because you have decided that yes, you want to try and pursue a career in open-wheel. It’s around $125,000, and SCCA Pro Racing sanctions this rather than runs it.

“But it’s the same tub for both F4 and FLites, so that if a driver or team owner does decide to graduate, he only needs to add FLites wings, bigger brakes, sidepods, etc. so he upgrades what he already owns. I haven’t looked at the precise cost of that, but it’s got to be cheaper than buying a whole new car.”

A day before Clarke spoke to Motorsport.com, Andersen Promotions revealed images of the handsome 2017 USF2000 car, to be built by French manufacturer Tatuus and called the USF-17. It will cost $51,400 minus engine, damper package and wheels, and its tub will also be used for the new Pro Mazda machine which will race in 2018.

That means by 2018, the currently antiquated first two steps on the Mazda Road To Indy will have been dragged into the same era as the Indy Lights car, Dallara’s IL15, which made its debut this season past.

However much Clarke plays down the Honda vs. Mazda rivalry, the fact is that the Formula 4 car is going to be very comparable to USF2000, FLites will be comparable to the next-gen Pro Mazda, and they even share philosophies in that the two categories in the respective manufacturers’ series will share a common tub.

The positives for the aspiring young driver is that such competition at this level not only improves the breed, it also drives down costs and increases choice. The negative is that the market is being saturated by junior open-wheel cars, which can create confusion among the casual viewers and potential sponsors, should they research the issue.

Clarke counters this by playing the cost card, as you would expect of someone whose position means he has to cater for the needs of cash-strapped club racers as well as more affluent open-wheel aspirants.

“Studies conducted by the SCCA showed us that the biggest obstacle in getting people into racing is the initial cost,” he states. “That’s what F4 is all about, because once they’re in the door we have a much greater chance of getting them up the ranks than if we don’t get them in at all.

“If we can make racing affordable and compelling, they’ll keep going. Motorsport is so damn expensive usually, and even if a driver earns a scholarship, he often can’t find the funding to reach the next level.

“The SCCA had a ladder system but it hasn’t been particularly strong up to now. I think Formula 4 in the vision of the FIA resets the starting point for aspiring open-wheel drivers.”