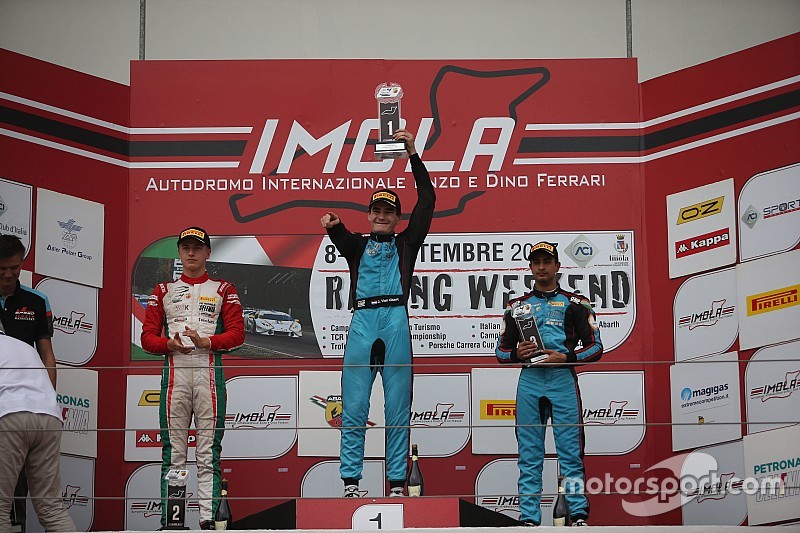 Rising Indian star Kush Maini started the second half of the Italian F4 season with a well-deserved podium finish at Imola.

Maini had qualified second for Race 2, which started under the Safety Car due to treacherous wet conditions. When the SC retreated after four laps, the 16-year-old hung on to the tail of polesitter and Jenzer teammate Job Van Uitert.

The status quo was maintained until the final lap when a small error from Maini allowed Vips to go through and sneak second spot. Nevertheless, a third-place finish was a fantastic result for Maini and bodes well for the remainder of the year.

It was Jenzer driver’s first podium of the season and second since he joined the category last year.

Earlier in the weekend, Maini started a dry Race 1 from sixth on the grid but got bumped down to eight in the opening laps.

However, the Bangalore-born driver had the pace to fight back through the pack and he overtook a slew of drivers - including Ian Rodriguez on the final lap - to finish fourth.

Maini was on course for another podium finish - if not a victory - in the final race of the weekend. In tricky wet conditions, he closed in within 0.167s of race leader Van Uitert.

However, before he could make a pass the lead, he got hit by a rival driver and forced into a spin. The 16-year-old immediately dropped to 10th position, but managed to pass Lorenzo Colombo to finish ninth.

Following his most successful outing of the season, Maini is now 10th position in the drivers in the standings.