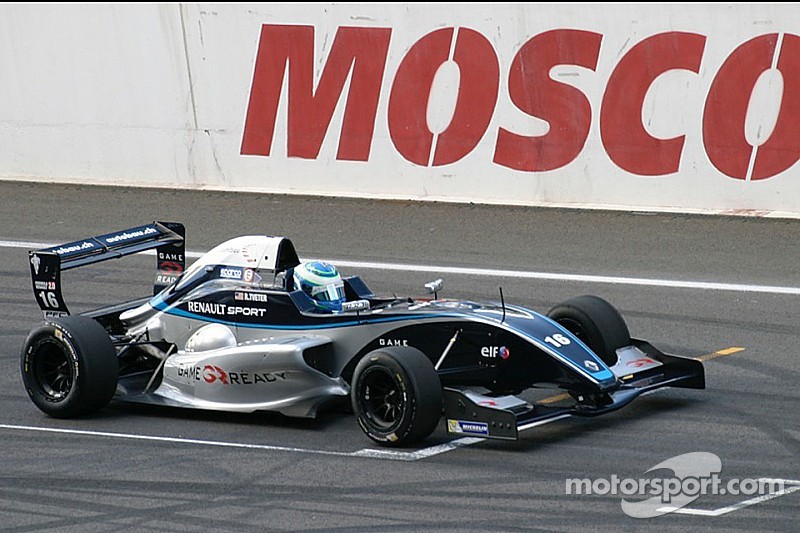 Comes from eighth in Formula Renault 2.0 NEC race in The Netherlands.

Old Glory waved on the podium at Assen, the Netherlands on Sunday after America’s Ryan Tveter came from eighth place to finish second in a 25-minute Formula Renault 2.0 Northern European Cup race attended by some 80,000 fans.

It was the first podium finish ever in this international series for the 20-year-old driver from Oyster Bay, N.Y. who is sponsored by the Game Ready Injury Treatment System and Switzerland’s Autobau conference center and racing museum. The race was part of Gamma Racing Day, Europe’s premier combined car-, motorcycle- and superbike-racing event.

Coupled with a sixth-place finish in the first half of the doubleheader on Saturday, Tveter rose two positions in the driver point standings and is now in eighth place in the championship with two events remaining. It also helped support first place in the team standings for his team, Josef Kaufmann Racing.

Sunday’s race was all about the standing start, and Tveter’s was sensational. He passed Ukyo Sasahara, Stefan Riener, Callan O’Keeffe and two of his teammates, Louis Delétraz and Gustav Malja, to rise from eighth to third all by the fourth corner on the first lap. Ben Barnicoat led the first lap but then retired with mechanical difficulties, which vaulted Tveter into second place on lap two. He chased the winner, Seb Morris, the rest of the way.

With no full-course cautions the 24-car field spread out, but Tveter was able to keep his concentration level high. He consistently hit his marks and made no mistakes to secure the podium finish for himself, his sponsors, his team and his country. He took the checkered flag 2.333 seconds before the third-place finisher, Delétraz, did after 16 laps of competition on the 2.824-mile, 17-turn road course. Sasahara and Malja rounded out the top five.

“I’m elated!” Tveter said afterwards.  “I had a really good start and first few corners. I was able to cut to the inside for Turn 1 after passing O’Keeffe off the line and gained three more places on the exit. I moved to the outside for Turns 2 and 3 and passed my teammate, Louis Delétraz, around the outside of the long right hander to move into P3 by the fourth corner.

“Barnicoat was leading but he was losing oil and had to stop, so Iinherited second at the end of the second lap after he slowed down on track.  Igot into a good rhythm, drove my own race, and am so happy to finish in P2. I want to give a huge thanks to the team, Game Ready and Autobau. It’s so satisfying to see all the hard work pay off with a great result. I’m looking forward to a short break at home in the States and then returning for the next round of NEC at Most, Czech Republic at the end of the month.”

"The precise and aggressive way Tveter drove today is why people come to see formula-car races; 80,000 spectators were here at Assen, and Tveter gave them a very exciting show," said Lars Kaufmann, manager of Josef Kaufmann Racing. "I have never seen an opening lap like that; so impressive! It's thrilling to watch a driver push the car that we prepare to the absolute limit and hold it there for an entire race. Tveter did an excellent job this weekend and continues to develop extremely well."

Not as lucky in race 2

Tveter started eighth in Saturday’s race and also got off to a great start. He was fifth by the end of the first lap after he passed Matthew Graham, Alexander Albon and Delétraz.

At that point there was a full-course caution. Albon passed him back working lap five to push him back to sixth, and he dropped one more spot when Sasahara made contact with Tveter with about 6 minutes remaining in the race.

Tveter regained sixth working lap 10 when he passed Sasahara back with a brilliant move around the outside into the fast Turn 6 chicane. The driver who placed seventh, Graham, mounted a challenge but he was 0.667 of a second behind Tveter at the checkered. O’Keeffe won that race over Barnicoat, Malja, Morris and Albon.

The series’ next event is Aug. 29-31 in Most, the Czech Republic, and its season finale is Sept. 19-21 at the Nurburgring in Germany.

Three events remain in another series in which Tveter competes, the Formula Renault 2.0 Eurocup series. Those events are Sept. 12-14 at Hungaroring, Hungary; Sept. 26-28 at Paul Ricard in France and Oct. 17-19 at Jarez, Spain.