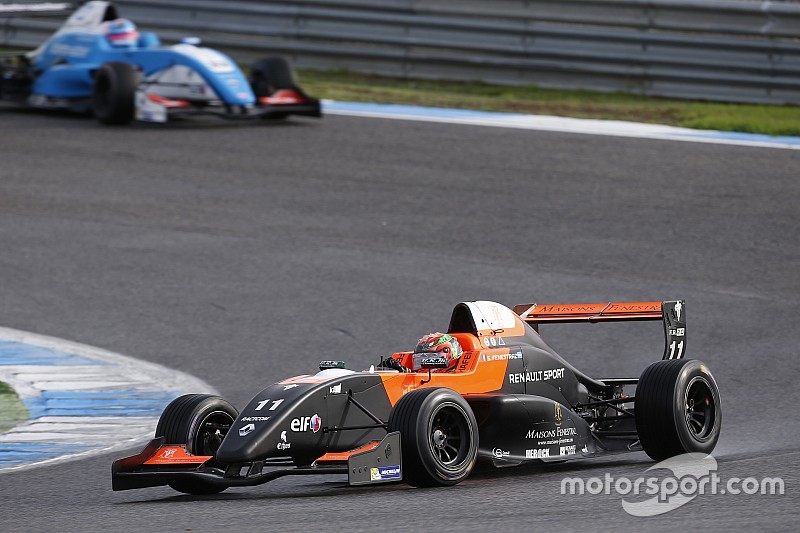 Sacha Fenestraz was victorious in the season finale of Eurocup Formula Renault 2.0 at Estoril, while Lando Norris collected the 12th podium of his title-winning campaign.

Tech 1’s Fenestraz led the way from pole with AVF’s Henrique Chaves demoting Max Defourny and Norris in the order.

While Fenestraz continued to lead, Chaves came under immense pressure from Defourny, who made quick work of the Portuguese to move to second.

His perils didn't end as Chaves lost another place to Norris soon afterwards.

The 2016 champion then caught up with Defourny ahead as the battle for second position ensued.

Up ahead, Fenestraz eased to his second win of the season in damp conditions at Estoril, with Norris coming home in second.

The British driver managed to get Defourny on the penultimate lap, taking the inside line into the corner, with the Belgian having no pace to challenge back.

Behind the top three, series vice-champion Dorian Boccolacci overtook Chaves to finish fourth, the AVF driver then attacked by Robert Shwartzman, whom he managed to keep at bay in the end.

The Kiwi wildcard entrant led a train of four cars starting the final lap, and, while he was beaten by Baptista, he stayed ahead of Force India protege Jehan Daruvala and Julien Falchero.