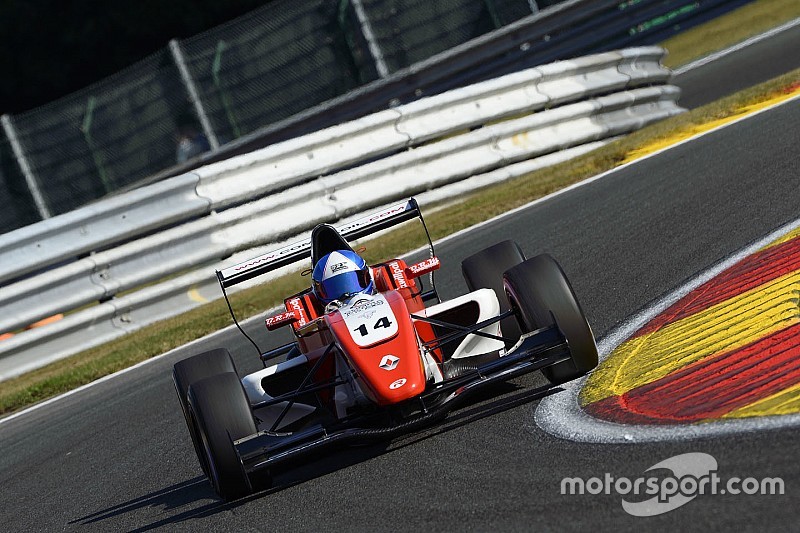 Will Palmer took his maiden Eurocup Formula Renault 2.0 win in a dramatic race at Estoril after leading duo Lando Norris and Max Defourny collided on the final lap.

The 2016 Eurocup champion got off to a good start from pole while front-row starter Palmer slotted in second ahead of karting graduate Marcus Armstrong.

JD Motorsport’s James Allen slid off the track on his own during the opening lap, the Australian going airborne for a brief moment and bringing out the first safety car.

Following the restart, the top three held their position but Tech 1’s Sacha Fenestraz spun from fourth to drop way down the order to 18th.

Meanwhile, R-ace GP’s Max Defourny clawed up to fourth from 11th before another safety car period began because of Alexander Vartanyan's stationary car.

Norris, once again, held his position from Palmer on re-start, while a slight off-track moment from Armstrong was enough for him to drop down the order.

Up ahead, Defourny cleared Palmer and closed in on Norris, the duo soon engaging in a feisty battle for the win.

The Belgian tried hard to go past the British driver and finally got a chance on the last lap when Norris made a mistake at the final corner.

The two were side-by-side heading into Turn 1 with Defourny having the inside line, but the pair of them collided while turning in.

While Norris limped back into the pits to end up 16th, Defourny retired immediately, handing the win to Formula 1 driver Jolyon Palmer’s brother Will.

Hugo de Sadeleer finished an impressive second from 13th, while wildcard entrant Alex Peroni completed the podium, after the original third place finisher Robert Shwartzman was given a 25-second time penalty for overtaking under a safety car phase.

Behind the top three, Dorian Boccolacci finished fourth ahead of AVF’s Harrison Scott with Fenestraz recovering from the earlier spin to end up sixth.

Fortec’s Bruno Baptista survived several wheel-to-wheel battles to finish seventh after teammate Ferdinand Habsburg spun out on the final lap, while the two were fighting for track position.

In the end, Armstrong finished eighth followed by Force India junior Jehan Daruvala, who fought back from 20th to ninth, and Nikita Troitskiy.

UPDATE: The stewards reversed the Shwartzman penalty, as a result the Russian takes back the podium from Peroni, with all the drivers behind losing one spot each.