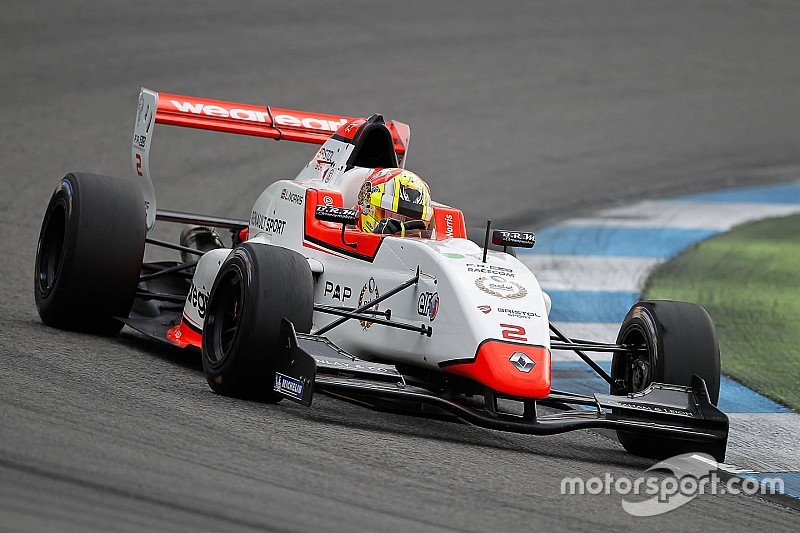 Lando Norris took his third single-seater title of 2016 in the Formula Renault NEC 2.0 series in the season finale at Hockenheim, after prior success in Toyota Racing Series and Eurocup 2.0.

Norris lost his lead from pole in Race 1 at the start, with front-row starter Sacha Fenestraz making the decisive move of the race to P1 in Turn 1, on a damp track.

While the lead group got through without any hitch, there was carnage behind with two separate incidents leading to a safety car period.

Further up the road, JD Motorsport’s Alexey Korneev spun out along with MBM’s Alex Gill. The race was declared wet with rain falling during the safety car period.

The cars lined up on the grid for mechanics to change tyres and the race was re-started with less than nine minutes remaining, behind the SC.

After a few laps behind SC, Fenestraz led the way from Norris and R-ace GP’s Max Defourny in treacherous conditions.

But the race was stopped with less than two minutes remaining due to severe conditions, giving Fenestraz his first win of the season, while Norris was second and Defourny third with only four laps officially taken into consideration.

Behind, Josef Kaufmann’s Robert Shwartzman and BM Racing’s Bartlomiej Mirecki tussled for fourth with the Polish driver holding off Shwartzman, registering his best result of the season.

Russian rookie Shwartzman kept his lead at the start of the second race with Defourny right behind, while Norris dropped to fifth from third.

Tech 1's Hugo de Sadeleer slotted into the final podium spot, just ahead of teammate Fenestraz, with the third car of the French team of Dorian Boccolacci up to seventh from 14th.

Up ahead, Defourny started to close in on Shwartzman and was right on his tail, with the two going wheel to wheel through several corners.

But ultimately the Belgian had to give up as the Josef Kaufmann Racing driver took his second win, finishing 0.586s ahead.

Meanwhile, in the battle for third, Fenestraz was able to clear teammate de Sadeleer to take final rostrum position.

The Swiss driver then lost out to Norris, who took fourth and secured the NEC title, while a host of drivers were in a fight for sixth behind.

Meanwhile, on the final lap, Baptista suffered a heavy crash after clipping Laurents Horr's car - the Brazilian going across the track, hitting the wall and coming to a halt.

Though Horr kept running, the German dropped behind the fighting pair of Will Palmer and Daruvala to 14th.

Allen rounds of the season with maiden win

With a jump start from polesitter Fenestraz, it was Allen who swept past from third to take the lead of the race with front-row starter Mirecki second.

The Tech 1 driver was handed a drive-through penalty dropping him out of top 10, as fight for podium heated up with Defourny and Norris getting up to speed.

With Allen leading comfortably, Defourny slotted into second after clearing Gill and Mirecki, as Norris followed suit and got up to third.

The Belgian was closing in on the Australian but a late safety car period due to Palmer's crash meant Allen had his first NEC win under his belt.

Defourny, runner-up in the standings, finished second in the race with Norris completing the podium.

Behind, Mirecki equaled his best result of fourth, with Gill fifth and de Sadeleer making up 10 places to sixth.

The Fortec crew were able to repair Baptista's car as the Brazilian took seventh ahead of the fighting duo of Boccolacci and Daruvala. Falchero completed the top 10.