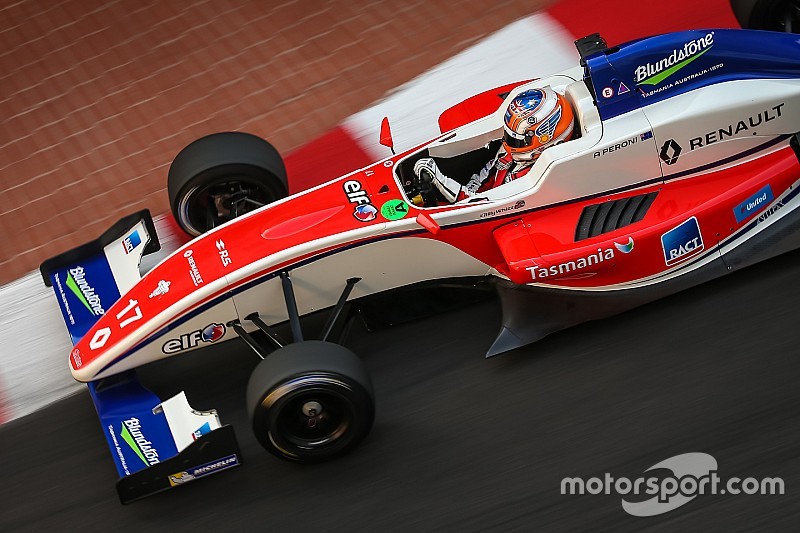 Formula Renault Eurocup front-runner Alex Peroni went one-on-one with Motorsport.com to chat about his plans to add another name to the list of Australian Formula 1 drivers.

Seventeen-year-old Alex Peroni is actually a bit of an unknown in his native Australia. He’s never actually raced cars on Aussie soil, having jumped straight from karting into the Italian F4 Championship in 2015.

After dominating the V de V Challenge Monoplace series last season, he made an impressive jump into the competitive Formula Renault Eurocup series this year – and promptly took a surprise win on the streets of Pau.

While a rocky run of form since Monaco means he’s no longer a title contender for 2017, the lengthy glimpses of promise and string of excellent results in the first half of the season mean he has his eyes firmly fixed on making it all the way to Formula 1.

MOTORSPORT.COM: How would you rate the season so far?

ALEX PERONI: Up and down, which I think can be expected from your first year in Eurocup. It’s highly competitive, and there’s probably the best junior drivers in the world in that championship right now.

We started off well, which was kind of unexpected given it’s my rookie year. I expected to start off a bit slower and progressively get better, but we’ve kind of gone the opposite way. I started off well, I consistently in the top five or six, and got the win at Pau which was amazing. But then after Monaco, there was a bit of a slump through June and July. There was a bit of bad luck, and a bit of just being a little bit off the pace – and being a little bit off the pace in a championship like Eurocup can be bad.

You’re only a few tenths off, but it’s a lot of positions. It can be 10 places on the grid.

After dominating the V de V series in 2016, was it a shock to come into such a competitive championship and have to fight so hard for every single tenth?

Yeah. I did do the wildcard last year, which went well – I was on the podium before the position got changed and I wound up fourth. And I did race Formula 4 in the Italian Championship in 2015, and that was very competitive, very close.

So I knew what to expect, but I’ll be honest and say that at the first round in Monza, which is always hectic, I was a bit behind in terms of race craft. But I’ve caught up on that during the season.

What’s the career plan from here?

Personally, I don’t like looking too far ahead. It’s important to stay focused on the task at hand and take it one step at a time. But obviously there is a ladder system to Formula 1, and you have to make steps up. Ideally it would be nice to go to FIA Formula 3 next season, but it all depends on budget. We’re still looking for funding to finish this season, so it’s important to not look too far ahead just yet.

Would you stay in Eurocup for another season? Maybe challenge for the title?

Yeah, I think being a rookie this year it wouldn’t hurt to do another season. Around Pau, when I was sitting fourth in the championship, I thought maybe I could go for it this year. But I’ve fallen a bit behind now, I’m sitting eighth, so it’s all about wins and podiums from here.

I wouldn’t mind doing another year, and if I did another year the aim would be to win the championship. We’ll see what happens.

But the ultimate goal is definitely Formula 1?

It all depends on funding, and that’s one of the big factors in moving up. But you have to aim for the top. I’m in a decent position to get there; I’m still reasonably young at in the right category for my age. In this era you have to move up so quickly, because big teams are looking for young drivers that are already racing ridiculously fast cars.

Yeah for sure. We’ve been in talks for a while and we could officially announce it recently. It’s a good partnership to have, and I’m excited to see where it goes.