Endurance racing is hard, even on iRacing 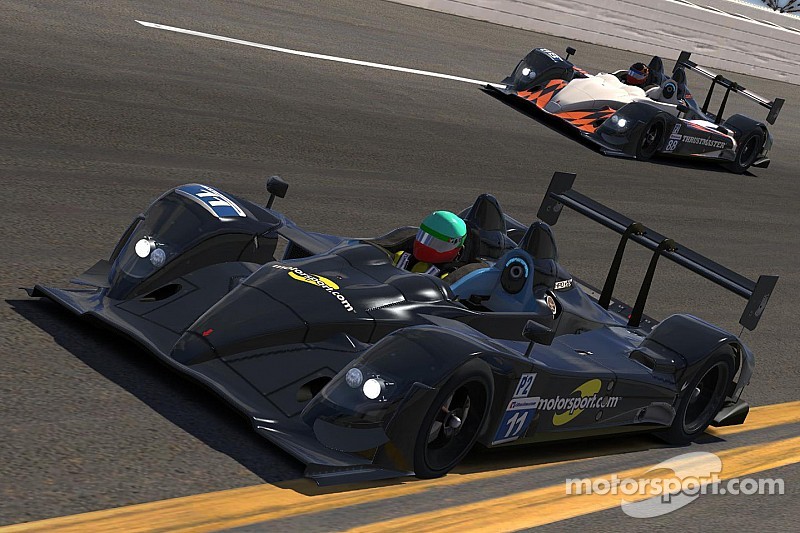 Ever wanted to try your hand at running a prototype for 24 hours around Daytona International Speedway's infield road course, just like the pros?

I attempted a 24-Hour endurance race.

Believe it or not. I don’t have a million dollars tied up in racing equipment, I had to fly nowhere and I don’t have to repeat some sponsors name over and over.

But…I did have to be on schedule, be consistently quick and preserve a race car that we learned is just a little bit fragile.

Three other 'drivers' and I created a racing team. Named it JCDM Motorsports. Myself, Christopher DeHarde (Motorsport.com Contributor), Joe Adgie (Valdosta Times Reporter) and Josh Chin (Sim Racing Ace) decided that is was a good idea to enter a car, specifically a Honda HPD ARX-01c, and commit to running it for as long as it will go, trying to best 14 other prototypes and stay out of the way of 28 GT3 cars.

Now, I don’t know if I mentioned that we were sim racing.

Recently, iRacing, the web’s most well known sim racing service, introduced driver swaps and 24 hour race servers. This, in effect, created the ability to host and participate in 24 hour races.

This past weekend was the Roar before the (iRacing) 24 test event. JCDM Motorsports was a part of that event.

Endurance racing is tough. The actual driving part is reasonably easy. When you are on track and running against a whack load of cars that are very much slower than you, for the most part you control your own destiny. Racing with the cars in your own class is likely the most dangerous part of it.

Even without the physical stresses of a hot cockpit, the continuous g-forces, the team radio chatter constantly in your ear, endurance racing is tough. Figuring out who is available when, what sort of time we are losing or making up to the cars around, where are we in the fuel stint, is the next driver ready to go. Your mind is constantly working, thinking of some calculation that if you tried to explain to your wife, she likely might just shake her head and walk away.

Despite this, our team lasted an incredible nine-and-a-half hours. As a team, we feel that is an impressive attempt for a first attempt at a 24-hour event. And, to boot. It was just a test race for an event slated for the end of the month, one week after the REAL Rolex 24 at Daytona.

iRacing makes all the statistics available for all the events it holds on its servers.

For those of you who like statistics, enjoy. For our team, we gathered as much information as we possibly could to make sure we had something to move ahead into the real 24 hour event. Here are the highlights.

212 teams entered, causing iRacing to follow standard procedure and split the races up by team rankings. This made a total of 5-24 Hour events happening simultaneously, as their own events.

Out of those 212 teams, there were 219 drivers in HPD prototypes, and 491 drivers in GT3 cars, to make a grand total of 710 different drivers participate in the race.

The top split, and second split (races with higher ranking teams) completed a total of 859 laps in the 24-hour period. Two of the five races saw the GT3 race come down to two cars on the same lap for the win, while the closest margin of victory the prototype class saw was 8 laps.

212 teams entered the races, and 24 hours later there were still 66 cars across the 5 servers still pounding away.

Within our team, we ran a total of 331 laps before a minor incident ruined our race. All four drivers took time in the car, with Josh Chin running the most laps at 120. We led a total of 16 laps, at two very different points in the race.

I got to run a double stint early in the race, completing 60 laps. While I was far from the fastest on track, I kept the car on the pavement. I suppose in endurance racing, what else can you ask for from a rookie?

What to expect in the REAL race?

Prototype teams discovered that even digital fiberglass is tough to repair once it gets bent. That was what went wrong with our team. Two very minor off track excursions by two different drivers bent the left front, slowing us for a period of time. A good shot from a GT3 car after a small spin is what sent us packing.

There was some uproar from a couple teams who had their days end very early due to what was taken as light contact, but at the end of the day, what was learned is that prototypes are delicate machines, and you must drive as such in endurance racing.

I spoke to iRacing officials after the event, to help get statistics and debrief about the event. While they did hear some feedback regarding the prototypes damage situation, they always working to improve the service, and look forward to having more entries in two weeks time to host an even more competitive, and actually official 24 Hours of Daytona.

I think there will be about the same number of entrants, but the quality of those entrants will be heightened. Margin of victories will be smaller, more laps will be completed, and there will be more cars running at the finish.

A ton of fun had by all

iRacing users have been gushing about the event, and if comments on their forums are any indication, the race in two weeks should be a blast.

“It was a lot of fun and very much reminded me of real life endurance racing. Our race ended early (260 laps in) with an expired engine in our Z4 which was a bummer, but the driver-swaps went smoothly and it was still a great time,” said user Mikah Marnett.

“Nothing like driving with the responsibility of carrying the hopes of your whole team to keep you under control.”

Congrats to all the teams who participated, and look out for JCDM Motorsports in a couple weeks.

iRacing looks towards 24 Hours of Daytona