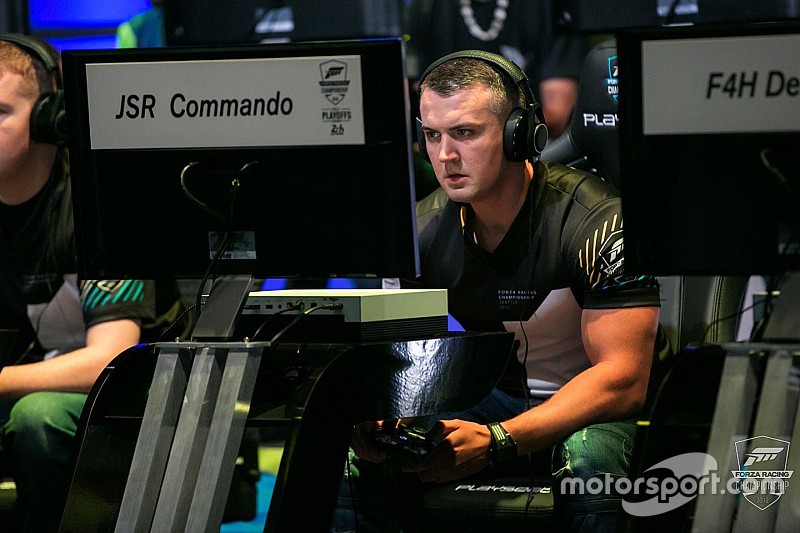 Shaun Arnold, David Hoch and Chris Farkas have become the first gamers to book their place in the finals of the Le Mans Esports Series.

The fastest 10 drivers from each region – Europe, Asia-Pacific and Americas – in hot lap qualifying, competed in three online races, with the winner advancing straight to the Le Mans Super Final and earning a $1000 cash prize.

Arnold, more commonly known as ‘JSR Commando’ took pole position for the European race but lost the lead to Scott McCormack (‘F4H Scottsin’) on the opening lap of the two-hour endurance race.

Arnold was able to re-pass the F4H Motorsport driver just 15 minutes into the race, throwing his 1993 Peugeot 905 Evo around the outside of McCormack at Becketts.

“We battled it out for around 15 minutes and every time I would look for an overtake into Club but he had great defence so I decided to try something different,” Arnold explained to Motorsport.com.

“I could see I was gaining on him though Copse, Maggots and Becketts so I decided to go into Maggots full speed and managed to go around the outside of him in Becketts and hold the lead from there.”

Once the overtake was complete, Arnold raced into an unassailable lead, leaving McCormack to try and fend off a trio of Williams Esports drivers for second place. Williams’s Michael Coyne was running in fourth until he spun into the gravel at Farm Curve, dropping to sixth.

His team-mate Gary Mitchell was McCormack’s closest challenger, taking the second position on multiple occasions but he was eventually forced to settle for third when he ran wide onto the grass at Village.

“It feels awesome to qualify for Le Mans in the first round,” Hoch told Motorsport.com. “I competed in an Esports event at Le Mans a couple of years ago, so it'll be awesome to head back there and compete again.”

Incredibly, Farkas ran the whole race on the internet from his mobile phone’s hotspot, after connection issues with his home wifi.

“I’m still a bit in shock that I will actually be going there and on top of that, to be competing is unbelievable,” Farkas explained to Motorsport.com. “I missed out on going last year for season 3 of the Forza Racing Championship due to conflicting real-life racing, so to be able to finally go, let’s just say I’m counting the days already.”

Visit www.lemansesports.com now to register and begin qualifying for Fuji – the latest opportunity to qualify for Le Mans 2019.