ESPN among broadcasters for 24 Hours of Le Mans Virtual 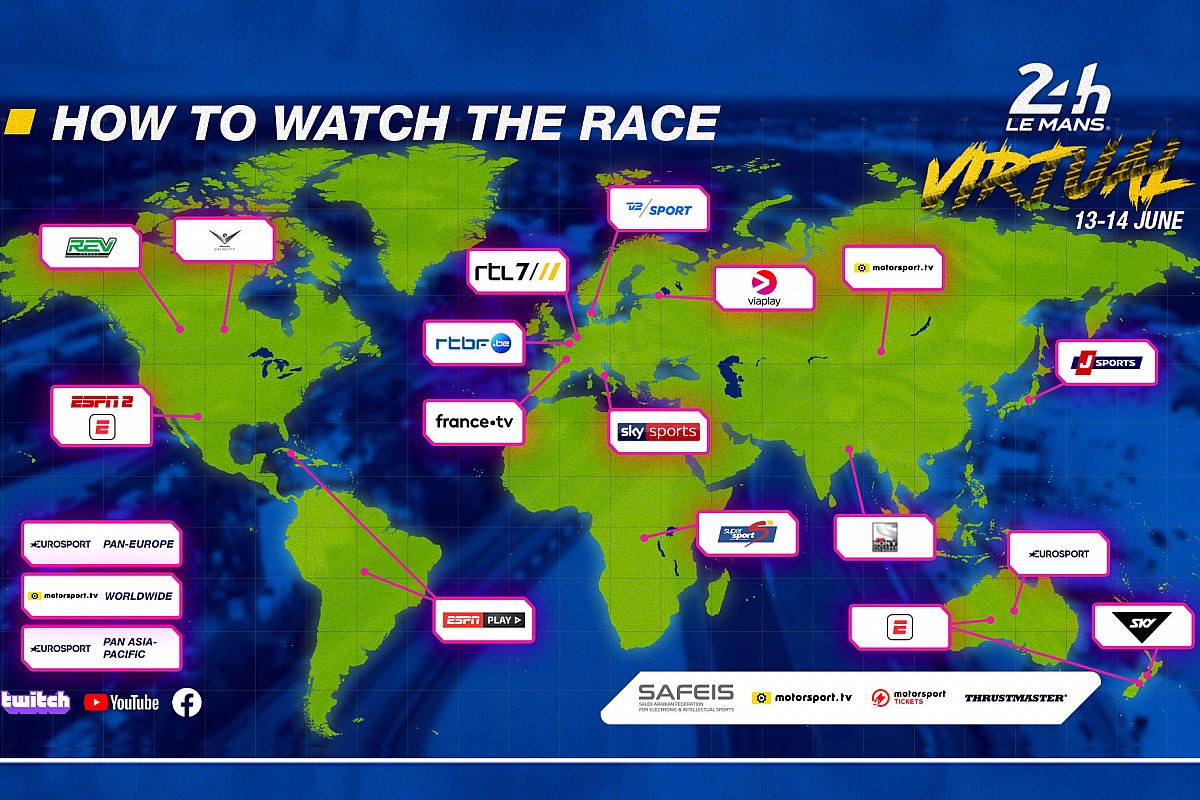 A host of major broadcasters including ESPN in the USA and Eurosport pan Europe and pan Asia will televise the inaugural 24 Hours of Le Mans Virtual, bringing the exhilarating combined world of motorsport and esports to a potential 400 million plus homes across the globe.

A special TV show covering this unique event will be produced live from Paris and will include an expert commentary team made up of nine-time Le Mans winner Tom Kristensen and the 2013 FIA World Endurance Champion, Allan McNish. Also commentating on the virtual race will be endurance experts Martin Haven and Ben Constanduros plus pitlane reporter Hayley Edmonds.

With a quarter of the current F1 drivers plus renowned US-based teams such as Penske Motorsport as well as former IMSA and IndyCar Champions Simon Pagenaud and Juan Pablo Montoya set to compete at #LeMans24Virtual, leading sports enterprise ESPN will broadcast 12 hours of the race live on ESPN2, reaching millions of homes. American residents will also be able watch the full race live via the ESPN app and ESPN.com. Meanwhile, Discovery Velocity will air the whole race live in Canada plus REV - a 24/7 motorsports network – which will also follow the action live. South American stars Rubens Barrichello, Tony Kanaan and Pietro Fittipaldi, most of whom are domiciled in the USA, bring added interest to viewers across the world.

ESPN is distributing the Le Mans 24 hour virtual race internationally via its authenticated digital platforms in Spanish-speaking Latin America, Brazil, the Caribbean and Australia and the Pacific Islands.

With names on the entry list such as Fernando Alonso, Jenson Button, Sebastien Buemi, Olivier Panis, Jan Magnussen and Stoffel Vandoorne, there are star names from across the continent taking part. Pan Europe, Eurosport will air the first 2.5 hours as it happens on linear channels, a further 2.5 hours in the evening with the final 5 hours also broadcast live. Eurosport Player will show the 24-hours of racing in its entirety for all customers in Europe. Eurosport is free to air in Germany and the DACH regions, with a potential reach of 72 million homes. Furthermore, Motorsport.tv’s OTT platform will also show the full race live as well as on linear TV in Russia.

In France, fans have the option of tuning into Eurosport on TV, but they can also watch the virtual action via France TV’s OTT platform, which will show approximately six hours of the race live.

With the addition of Charles Leclerc, Antonio Giovinazzi, Felipe Massa and Giancarlo Fisichella to the Ferrari line-ups, fans in Italy can also tune in to the full 24 hours live from home on TV channel Sky Italia, the host broadcaster for F1 in the country. Interest is high in Denmark, and residents will be able to view the entire race live on sports broadcaster TV 2 while RTBF will show a special report in Belgium the day prior to the event. RTBF Auvio will show the race in full in Belgium.

OTT platform ViaPlay will broadcast Le Mans Virtual live in its entirety across Sweden, Norway and Finland. Finally, free-air-broadcaster RTL7 will show approximately 9 hours of the race live in the Netherlands, positive news for Dutch fans who will be eager to cheer on home driver, Max Verstappen. The race will also be shown in full on OTT platform, RTL GP.

Fans of Toyota Gazoo Racing’s Brendon Hartley in New Zealand can watch on Sky as the channel will air the full 24 hours live, while J Sports in Japan will show the opening and closing 3.5 hours of the race live so viewers can follow the fortunes of Hartley’s Toyota teammates Kamui Kobayashi and Kenta Yamashita plus the host of other worldwide stars on the grid.

In India, residents can tune in via Sony Entertainment Television while the continent of Africa will be covered in a pan-regional deal thanks to SuperSport, which will show the race in its entirety.

Online, the whole race can be followed on the FIA WEC / 24 Hours of Le Mans social channels and official App.

All information on the event can also be found on 24virtual.lemansesports.com