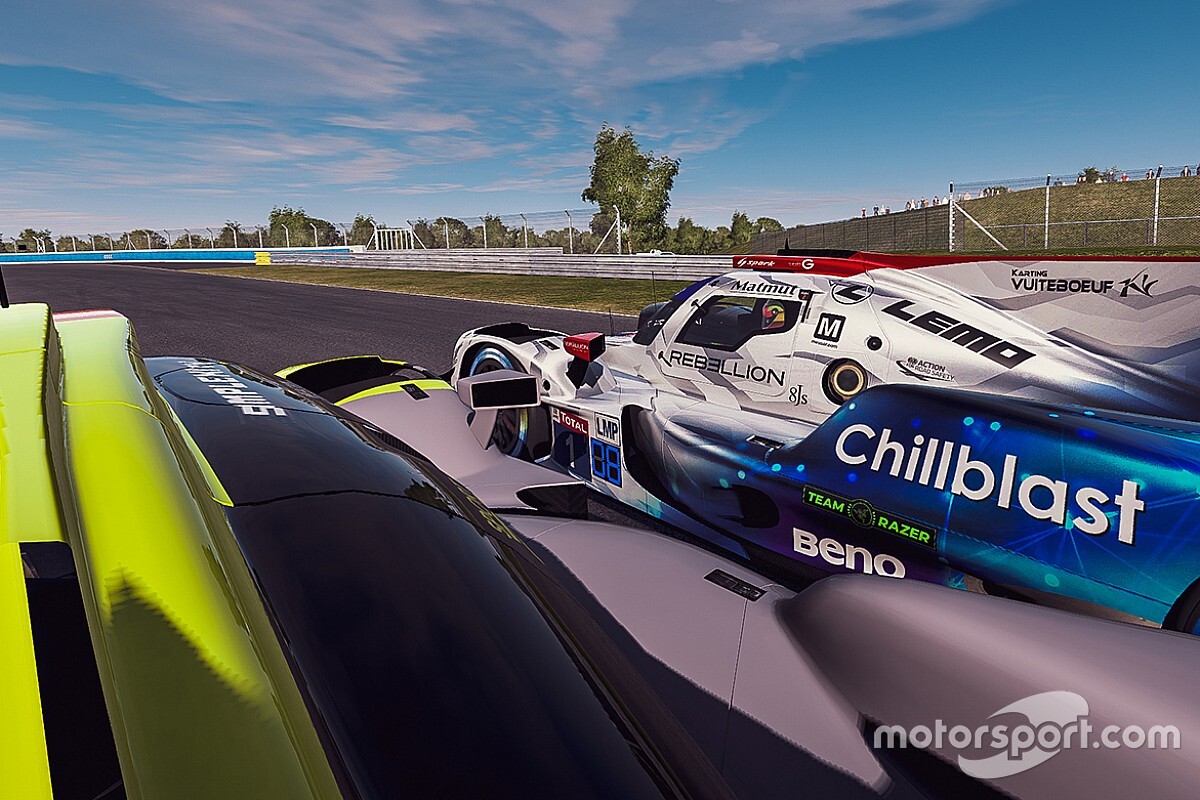 Rebellion Williams Racing continued to preserve its 1-2 lead in the 24 Hours of Le Mans Virtual’s 16th hour, with Raffaele Marciello remaining on top of the order.

The two Rebellion Williams cars enjoyed trouble-free running having picked up the lead after the Max Verstappen/Lando Norris Team Redline shunted during the first half of the race.

Marciello, leading by over 40 seconds from the #13 Rebellion Williams car of Michael Romanidis, only relinquished first place during the pitstops, but continued to hold control once Romanidis – then later, Marc Gassner following a driver switch – had made their own stops.

Polesitter Jernej Simoncic of ByKolles occupied third throughout the stint, ending the 16th hour just under 30s ahead of Jack Keithley, in one of four Rebellion Williams entries.

Keithley was passed by Devin Braune of 2Seas Motorsport having been punted out of the way by an errant GTE car. But Braune was cleared in the next round of pitstops, allowing Keithley to reclaim fourth place in the order.

Elsewhere in the LMP class, Cool Racing’s Nicolas Lapierre had initially run out of fuel in the pitlane and was unable to make it to his pitbox, plummeting down the order.

However, in a seemingly coordinated effort with the #36 Signatech Alpine car of Andre Negrao, Lapierre received a push from the Brazilian to make it back to his pit box – putting the Cool Racing #42 back in the race, albeit in 23rd place.

Lapierre’s compatriot Sacha Fenestraz sustained a crash at Indianapolis just past the top of the 15th hour, which was almost a carbon copy of Brendon Hartley’s shunt during the first hour of racing.

Fenestraz, driving the Veloce Esports 3 entry, was able to recover – albeit well down the order before handing over to Tom Lartilleux.

In the GTE class, the #93 Porsche entry continued to lead by over a lap, as Josh Rogers maintained the lead before handing over to factory Porsche driver Nick Tandy.

Rogers ended his stint with a significant lead over Dani Juncadella, driving a Corvette for Romain Grosjean’s R8G Esports team.

Mack Bakkum, driving a second Porsche, ended the 16th hour in third place among the GTE cars, while a thrilling battle for fourth in class emerged between Lasse Sorensen – in the #95 Aston Martin – and the #91 Porsche of Mitchell de Jong.

Sorensen managed to withstand de Jong’s siege for numerous laps, but the Porsche driver managed to pass his rival at the Indianapolis corner to claim the position.

Although Sorensen threatened to challenge once more, the Danish driver instead escaped to the pits nearing the end of his stint.

You can follow all of the action live on Autosport, Motorsport.com and Motorsport.TV.

eNHPL Get to Know the Drivers: Petty eSports