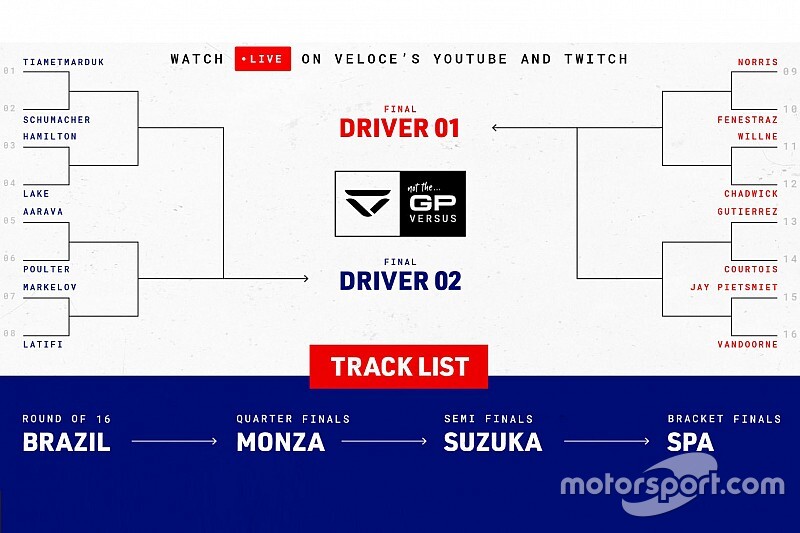 Veloce Esports’s #NotTheGP series will adopt an orthodox versus knockout format for its third event this Sunday, with W Series champion Jamie Chadwick among the debutants.

The round of 16 will have eight head-to-head races. The first race will see 2020 FIA Formula 3 driver David Schumacher, nephew of seven-time F1 champion Michael, facing off against popular F1 YouTuber Ben ‘Tiametmarduk’ Daly.

The winner of that race will race against either professional racing driver and YouTuber Archie Hamilton or electronic music producer and DJ Chris Lake.

Formula 2 veteran Artem Markelov and Williams F1 recruit Nicholas Latifi will battle it out in the one-lap shootout, as will former roommates and European Formula 3 teammates Norris and Sacha Fenestraz.

Popular mainstream YouTuber Will ‘WillNE’ Lenney will race against Chadwick, who also has a partnership with Veloce.

Courtois, who has recorded a best finish of 11th place in his three races in the series, will race against ex-F1 racer Esteban Gutierrez.

Fellow sometime grand prix driver Stoffel Vandoorne will compete against YouTuber Jay Pietsmiet in the final Round of 16 race around the virtual Interlagos circuit.

The four quarter-finals will take place at Monza, followed by two semi-finals at Suzuka and the final one-on-one at Spa.

All the action will be live-streamed on Motorsport.com from 1pm E.T; 6pm UK time.