Although several drivers entered this week's eNASCAR Heat Pro League race in desperate need to clinch a playoff berth, it was familiar faces winning the races.

By:
Tim Southers
Listen to this article

In the Xbox One division event, SHGSlick14x was in front of a multi-car accident that took away his biggest challenger for the win in Sam Morris (MorDog5) who spun in the incident while running second. The Stewart-Haas driver was able to go on and pick his first race win of the season.

The victory by SHGSlick14x - along with SHG_HotRod_14p already scoring a pair of wins in the PlayStation 4 division - makes Stewart-Haas Gaming the second team to have both drivers win so far this year. GoFas Gaming was the first team to do it this season.

The voice of Stewart-Haas Gaming Jake Morris was ecstatic after seeing one of his driver’s pick up a win for the second week in a row.

“I think we found a little magic (tonight),” said Morris. “We set some incentives up for these guys to go out there and win and we got it done.”

Team Penske Esports driver Brian Tedeschi (ShellVPower22) made it through the accident to finish second with Roush Fenway Gaming’s Nick Walker (wowTHATSgarbage) once again putting on a show coming from the rear of the field to finish third. 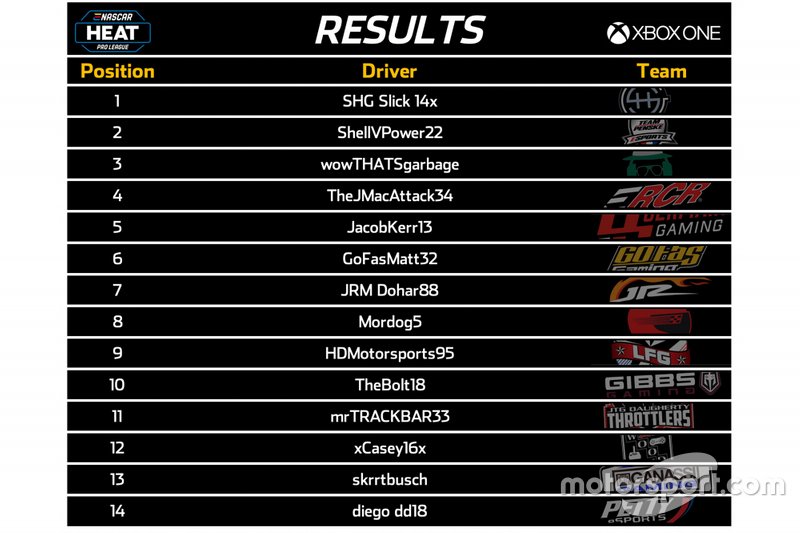 In the PlayStation 4 division event Wood Brothers Gaming driver Slade Gravitt (sladeg84) scored his first win since taking the season opener at Charlotte in May.

The Georgia teenager was able to make the pass with two laps by JRMotorsports driver Jason Keffer (JRM_Keffer7) and hold on for the victory.

“One my, unbelievable to have two wins,” said Gravitt. “Two wins with a lot on the line. I want to thank everyone at Wood Brothers and (sponsor) Spin for this opportunity.

“I couldn’t be happier. I don’t know if this was better than Charlotte (win) but it’s awesome.”

Gravitt, the youngest driver in the field who has just started his senior year of high school, said strategy helped position him to get the win.

“Corey Rothgeb (Pennzoil2) and I were saving gas us to had a plan and made an alignment this week. We worked together and it really worked out when (Keffer) and the (TJ McGowan/Voltage20_) caught on with our plan and went with us.”

Rothgeb finished second with McGowan, Keffer and SHG_HotRod_14p rounding out the top five.

By recording a pair of runner-up finishes by Tedeschi and Rothgeb, Team Penske Esports picked up their second event win of the season. 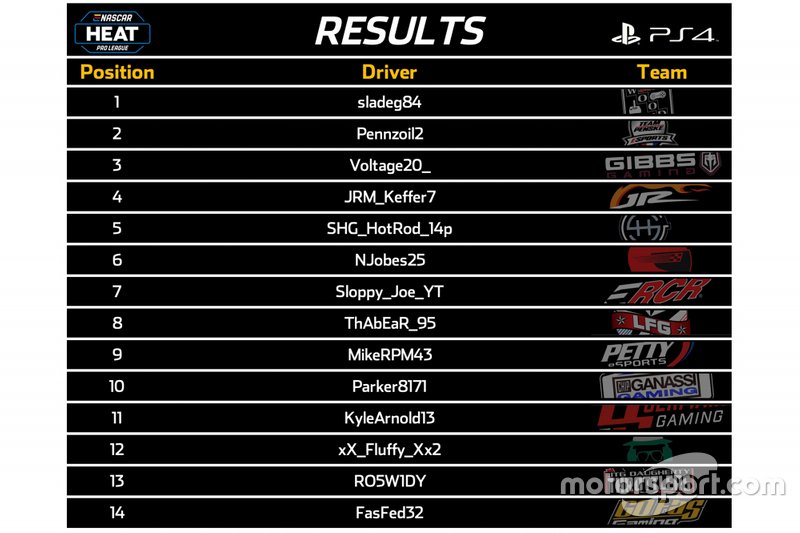 After losing the lead in the overall standings last week, Team Penske eSports moved back into the top spot to lead Roush Fenway Gaming by nine points (498-489) with one race remaining in the regular season.

Stewart-Haas Gaming is third with JR Motorsports and Leavine Family Racing rounding out the top five. 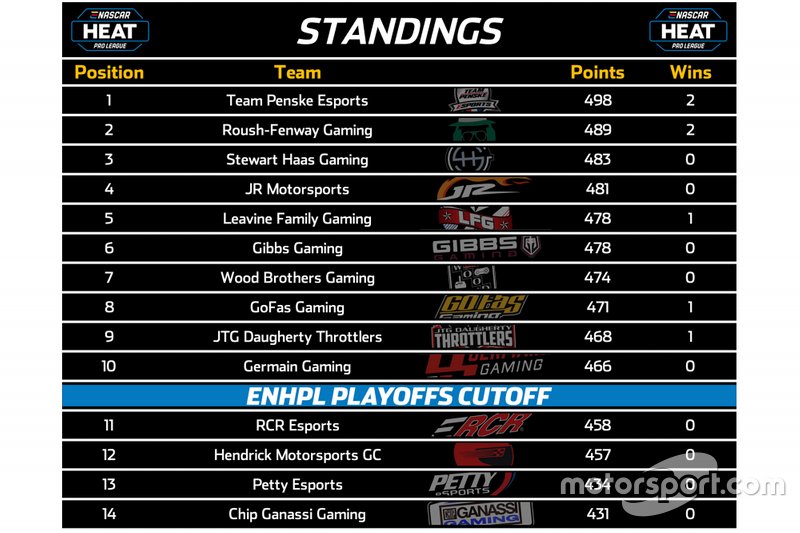 The regular season finale will be held on Wednesday, Aug. 21st at Daytona International Speedway. The pre-race show will kick off at 7:30 p.m. ET.

For more information on the eNASCAR Heat Pro League, please visit eNASCARHeat.com and you can also follow the league on the following social media platforms:

Fans will be able to compete on NASCAR Rivals to win prizes and a chance to go to the NASCAR Cup Series Championship.

As Formula 1 has pushed to reach a younger generation of fans and find new ways to get people into the series, Esports has been a big success story.

Behind the scenes of the Le Mans Virtual Series