Montreal, December 9, 2002 - Canadian racecar driver Ashley Taws is in hospital after sustaining injuries in an automobile accident on Saturday evening north of Toronto. Taws, 19, was one of five occupants in a car driven by a friend, and was on her ...

Montreal, December 9, 2002 - Canadian racecar driver Ashley Taws is in hospital after sustaining injuries in an automobile accident on Saturday evening north of Toronto. Taws, 19, was one of five occupants in a car driven by a friend, and was on her way home from the movies when the accident occurred. 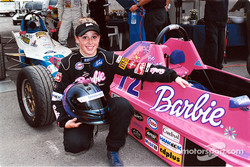 Ashley Taws with her car.
Photo by Ange Lisuzzo.

She sustained internal injuries, damage to her leg as well as a broken back. She underwent surgery last night at St. Michael's Hospital in Toronto and is scheduled for further tests tomorrow.

A medical update will follow as soon as it becomes available.